It is no secret that cows produce two things in abundance in the Dairy State: milk and manure.

Wisconsin’s 1.27 million dairy cows produce 3.2 billion gallons of milk and enough manure to fill almost 3,000 Olympic-size swimming pools a year, according to Steve Carpenter, director of UW-Madison’s Center for Limnology, who has studied the water quality of Madison’s lakes for 40 years.

Murky Waters: this series was produced collaboratively by The Capital Times and Wisconsin Center for Investigative Journalism. It is part of Water Watch Wisconsin, a project supported by The Joyce Foundation.

“The automation, the technologies that farmers use today have made them very successful,” said Monte Lamer, a former power plant operator in Alaska who is now plant manager for the Clear Horizons community digester outside of Waunakee. “At the same time, their success is showing up in our waterways.”

According to experts, agriculture accounts for roughly 70 percent of the phosphorus runoff in watersheds across the state, with urban runoff accounting for the remaining 30 percent.

It is closer to an 80-20 split in the Yahara Watershed in Dane County, said Carpenter, who hopes to find a way for the dairy industry to thrive while protecting water quality.

The agricultural runoff that often turns Madison’s lakes unpleasant by creating algal blooms that look and smell bad is expected to only get worse. 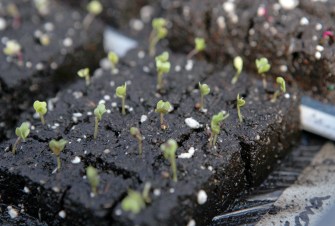 These seedlings are examples of the digester’s potential to foster business. They are grown by UW-Madison graduate student Brian Zimmerman and Madison resident Taylor Jacque in a greenhouse powered by the waste heat from the community digester near Waunakee.

“A 3-inch rain event can move a lot of manure and a lot of soil in the lakes at once,” Carpenter said. “And we are seeing more of those big storms.”

U.S. Environmental Protection Agency-driven regulations are calling for the state to get phosphorus out of its lakes. Carpenter and Lamer are among a growing chorus of dairy industry supporters who see manure digesters as key to lowering high phosphorus levels in waterways to meet the tougher regulations.

Since 2001, manure digesters have been popping up across the state. Wisconsin now has 34, the most in the nation, with two more scheduled to begin operating by 2015. In all these digesters, bacteria eat biomass like manure, food scraps or whey and emit energy in the form of methane gas.

Manure digesters cannot remove all the phosphorus from waste, nor do they completely remove other contaminants like hormones and anti-microbials, said Sarah Yang, a water evaluation toxicologist with the Wisconsin Department of Natural Resources.

The Dane County community digester is designed to remove 60 percent of the phosphorus from the processed manure, according to the DNR.

"Compared to straight land application, the digesters have the ability to degrade those contaminants, somewhat," Yang said. "But they were really designed to reduce pathogens, greenhouse gas emission and minimize odor."

Now, however, a changed political climate that is more hostile to renewable energy is stalling digester growth.

And spills are raising doubts about digesters’ reliability. 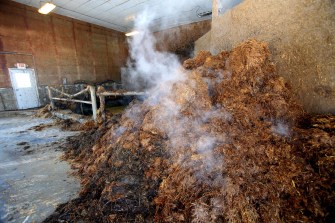 Not all waste is the same. Manure mixed with straw and hay is brought by farmers to a separate building at the digester near Waunakee, where it is processed separately from the manure pumped underground from the farms.

“Right now, the management of the (manure) runoff is a political compromise. And I understand the sensitivities that need to be addressed there,” Carpenter said. “But if, as a society, we wanted to have clean lakes, we could do it.”

Annual phosphorus runoff into Lake Mendota has fluctuated between 27,000 pounds and 178,000 pounds over the past 38 years with no apparent improvements in water quality, Carpenter said.

For years, Richard Lathrop, an honorary fellow at UW-Madison’s Center for Limnology and a retired DNR research limnologist, has been telling anyone who will listen that farmers need help processing their manure.

“We have to think about a whole new future — and manure is the path to that future,” Lathrop said. “Soil erosion reduction practices are not going to solve water pollution.”

Farms across the state also put together nutrient management plans. The plans, often partially paid for with government funding, outline when and where farmers spread their manure.

But while 5,088 farms in Wisconsin have nutrient management plans, they only cover about one-quarter of the state’s nine million acres of cropland, said Donna Gilson, a spokeswoman with the Wisconsin Department of Agriculture, Trade and Consumer Protection.

Of those farms, 263 are concentrated animal feeding operations, or CAFOs, industrial-sized farms required to have the plans.

For some, digesters impractical

Laurie Fischer, executive director of the Dairy Business Association, an organization that works to build a positive image and political environment for the state’s $26 billion dairy industry, said there are 10,800 farms in Wisconsin and manure digesters do not make economic sense for some of them.

“The big solution for the phosphorus problem is the nutrient management plans,” Fischer said. “When farmers use these plans and rotate their crops, they can actually save money by not having to buy (or buy as much) fertilizer.” 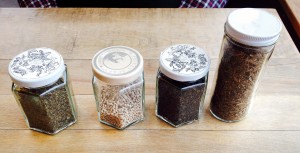 The group’s president, Jerry Meissner, has a digester on his farm and Fischer said it is important to Meissner that other producers in the state have access to manure digesters.

The DNR limits but does not ban CAFOs from winter manure spreading. Most farms lack the capacity to store their manure through the winter months.

Farmers turn to manure pits for storage, but those have problems, too. The pits are a source of methane emissions, a potent greenhouse gas, Lathrop said.

And the more manure is moved around, the greater the risk for spills.

In the past 10 years, 6.9 million gallons of manure have spilled across the state from tanker trucks or digesters, or leaked from lagoons, according to the DNR.

“A 3-inch rain event can move a lot of manure and a lot of soil in the lakes at once. And we are seeing more of those big storms,” said Steve Carpenter

“We would rather see the farmers who are profiting pay for them. If any other waste producer was producing a steady waste stream, they would not be rewarded,” she said.

Industry experts agree the boom in digester construction is coming to an end, but not for lack of cow manure.

There are enough cows in Wisconsin to sustain 251 digesters, seven times the current number, according to the Environmental Protection Agency’s AgSTAR Program.

In 2001 the state started its Focus on Energy program. It required utilities to obtain 10 percent of their energy from renewables -- wind, solar, biogas -- by 2015.

When utilities were trying to reach their 10 percent renewable quota, many were buying back the biogas from digester owners for 6 to 9 cents a kilowatt, making a digester financially worth it for an investor. That is now down to around 3 to 4 cents in most cases.

Consequently, some digester owners are flaring off, or burning, the methane gas emitted from the digester, because it cannot be processed or sold.

While support for digesters is waning at the Capitol, it is beginning to find traction with one Madison-based nonprofit.

The four-year-old Clean Lakes Alliance was formed specifically to improve water quality in the Madison area’s five lakes. The alliance’s goal is to reduce phosphorus levels by half in Madison’s lakes by 2025.

In 2012, the Clean Lakes Alliance published its first annual report. It stated it would cost $128 million to clean up Madison’s lakes, including private sector investment in manure digesters.

Of that amount, $49.5 million will be used to build five community digesters in Dane County, two of which are up and running. Each costs $12 million, leaving the remaining $10.5 million to cover the cost of the digesters to government subsidies or grants.

Don Heilman, president of the Clean Lakes Alliance, said the group is working with Dane County on the locations.

“We believe in them so much the community is ready and willing to invest in them,” he said.

Corporate partners include Madison Gas & Electric, American Transmission Co. and the Alliant Energy Foundation, which could prove helpful when these new digesters need to negotiate a rate for the biogas they produce.

The tipping point for Heilman, and other Mad-City Ski Team members, came about 10 years ago when the weeds were clogging boat motors and the skiers were reluctant to get in the water.

Lamer, the manager of the Waunakee community digester, thinks the greater Madison community may have reached a tipping point, too.

“Being human, we tend to grow used to things,” Lamer said. “Pretty soon, we accept the litter on the ground, the green water as just part of life. We don’t respond until it’s choking us. I think that’s where we’re at today. It’s choking us.”

This series, Murky Waters, was produced collaboratively by The Capital Times and Wisconsin Center for Investigative Journalism. It is part of Water Watch Wisconsin, a project supported by The Joyce Foundation that is examining water quality and supply issues statewide.
The nonprofit Wisconsin Center for Investigative Journalism (www.WisconsinWatch.org) collaborates with Wisconsin Public Radio, Wisconsin Public Television, other news media and the UW-Madison School of Journalism and Mass Communication.
All works created, published, posted or disseminated by the Center do not necessarily reflect the views or opinions of UW-Madison or any of its affiliates.