Food-safety workers traced one E. coli outbreak to a batch of raw clover sprouts grown in an Evergreen Fresh Sprouts LLC seed lot in Idaho, according to the U.S. Food and Drug Administration.

Evergreen Sprouts supplied the tainted sprouts to several Jimmy Johns locations, which is based in Champaign, Ill.

As of June 27, the outbreak had affected 18 people in Idaho, Michigan, Montana, Utah and Washington. Reports from the U.S. Centers for Disease Control and Prevention show that seven of those people had to be hospitalized.

No deaths have been reported. 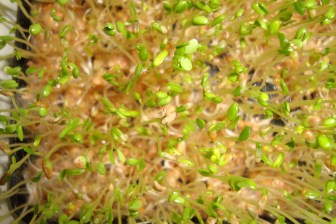 Food-safety workers linked one E. coli outbreak to raw clover sprouts. According to the U.S. Food and Drug Administration, the sprouts came from an Evergreen Fresh Sprouts LLC seed lot in Idaho.

The company also distributed the sprouts to the Pita Pit and Daanen’s Deli. Nine of the people who got sick reported eating at a restaurant supplied by Evergreen sprouts.

Part of the problem stems from unsanitary working conditions, noted the Food and Drug Administration. During inspections of the Evergreen Sprouts facility, food-safety workers cited multiple health hazards, including chipped and frayed tennis rackets used to scoop mung bean sprouts, and a rusty and corroded watering system to water the sprouts.

Almost a month after the outbreak began, Food and Drug Administration officials met with the owner of Evergreen Sprouts, who said the company would discontinue using the sprout seed lot linked to the outbreak.

The Centers for Disease Control reported a second E. coli outbreak in June, as well.Ground beef contaminated with E. coli affected at least 12 people in Missouri, Michigan, Ohio and Massachusetts. Reports show that more than half of those people had to be hospitalized.

According to the Centers for Disease Control and Prevention, the ground-beef outbreak stems from contaminated food produced by Wolverine Packing Company. On May 19, the company recalled more than 1.8 million pounds of ground beef for health concerns.

While illness reports have only surfaced in four states, Wolverine Packing distributed the contaminated beef to distributors and restaurants across the country.

The Centers for Disease Control and Prevention reported that the outbreak appears to be over.

E. Coli, otherwise known as Escheria Coli, is a multifaceted bacteria strain that can cause illness when consumed. The bacteria are commonly found in raw vegetables, contaminated water and undercooked meat.

They identified the ground beef strain as E. coli 0157:H7.

In 2012, the Centers for Disease Control and Prevention reported there were 98 hospitalizations and four deaths from E.Coli infections. 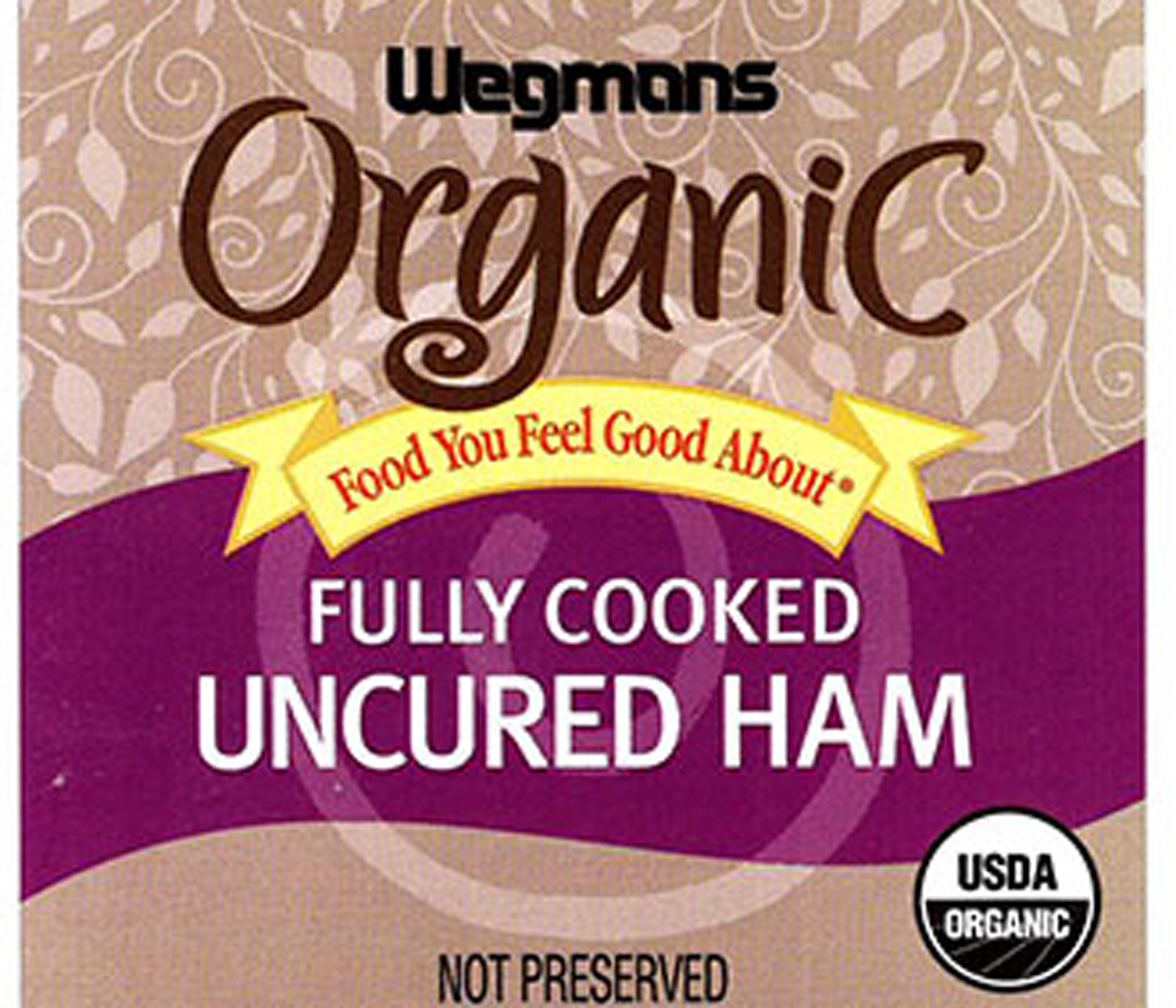 On June 27, the Food Safety and Inspection Service announced that E.G. Emils & Sons, Inc. of Pennsylvania recalled about 5,896 pounds of deli meat that may have been contaminated with plastic. “Wegman’s Food You Feel Good About Organic Ham” is the product being recalled. A Wegman’s employee noticed the problem when slicing deli meat, and it was traced to a piece of plastic that broke off of an interlocker belt during production. 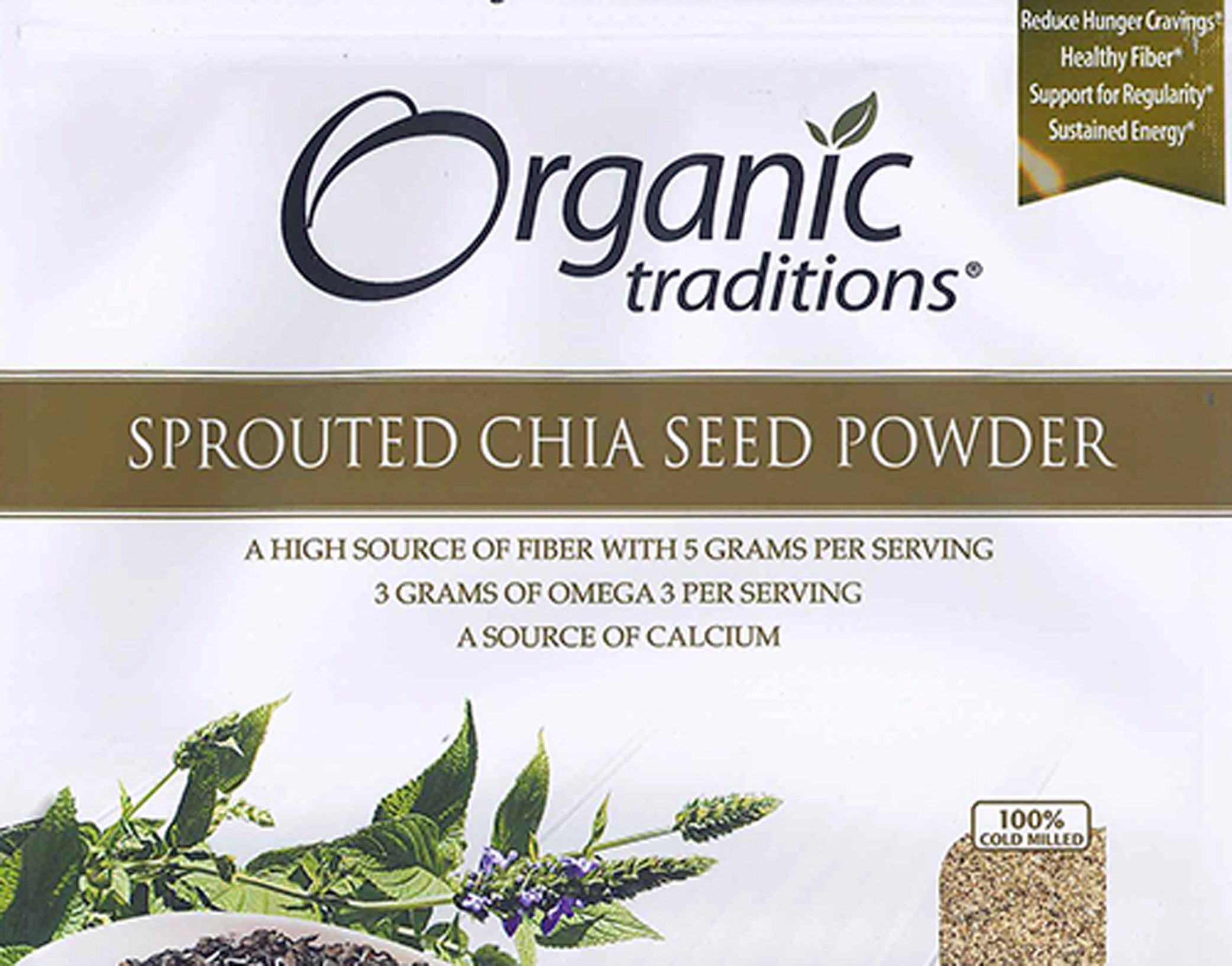 On June 4, the U.S. Food and Drug Administration announced that Health Matters Inc., based in New York, is voluntarily recalling Organic Traditions Seed Powder and Sprouted Chia/Flax Seed Powder because of a possible Salmonella contamination. The products were sold to distributors and retailers throughout 25 states. The products were also sold online. 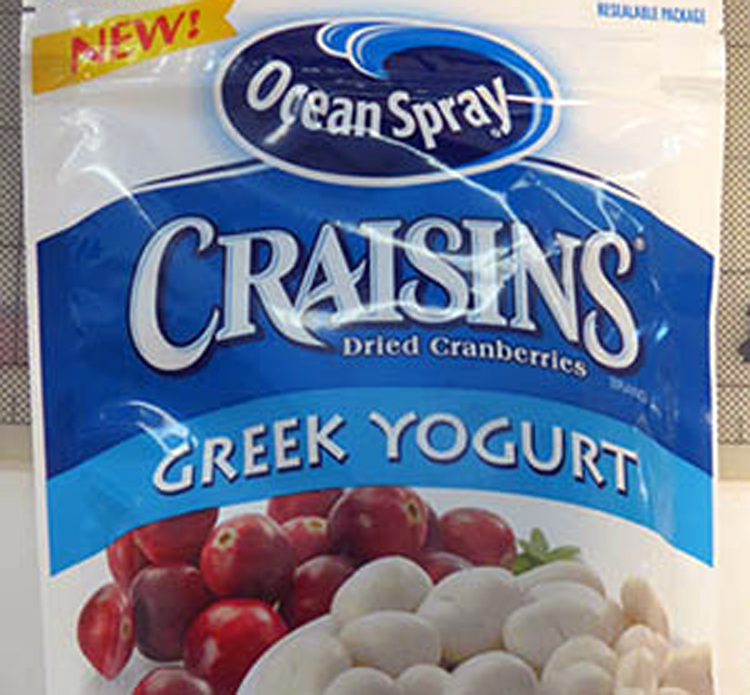 On June 4, the U.S. Food and Drug Administration announced that Ocean Spray voluntarily recalled “a limited quantity” of Ocean Spray Greek Yogurt Covered Crasins Dried Cranberries because the 8-ounce bags may contain yogurt-covered peanuts. The packaging states the product is made on equipment that processes nuts, but the company issued the recall as a precaution for consumers with nut allergies. 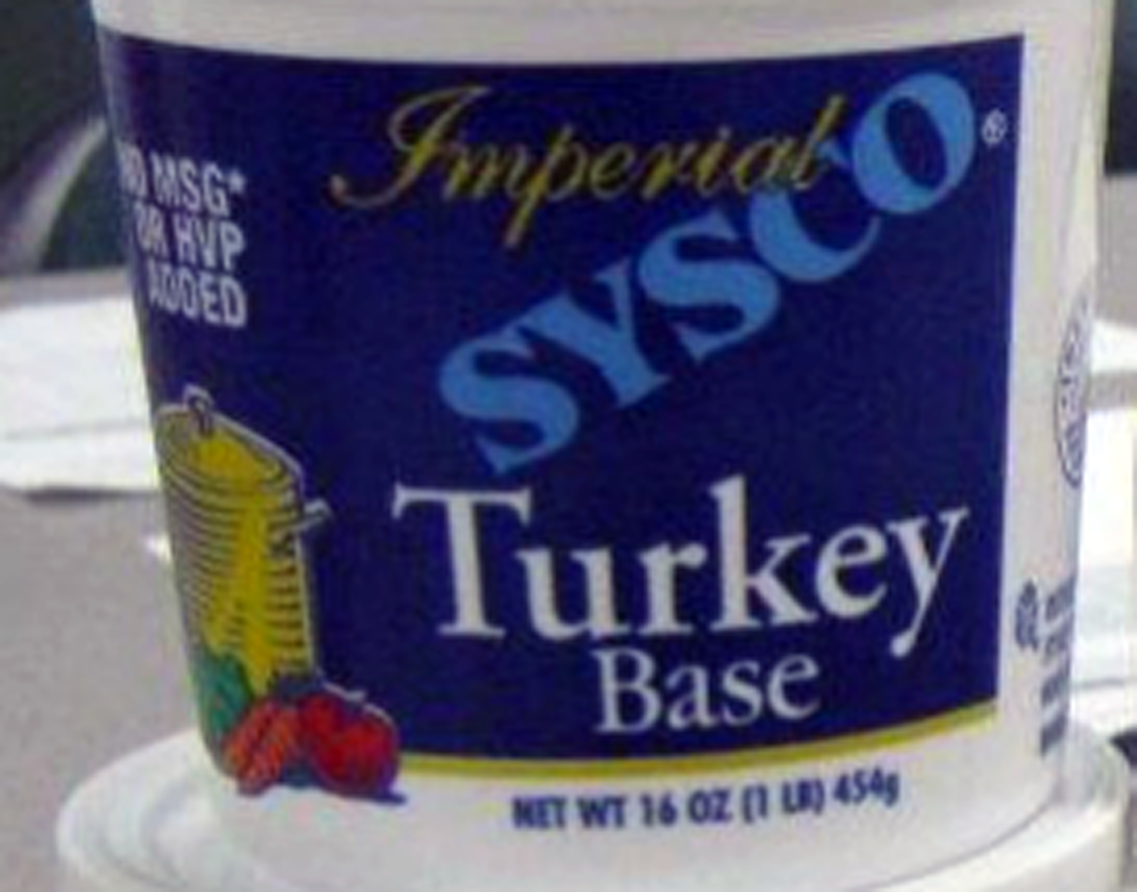 On June 13, the Food Safety and Inspection Service announced that Vanee Foods of Illinois recalled about 3,156 pounds of turkey base. The turkey base included milk, a known allergen, and was misbranded as a chicken base. A customer brought the mislabeled turkey product to the company’s attention. U.S. Department of Agriculture officials classified the recall as a Class I, high-risk recall. 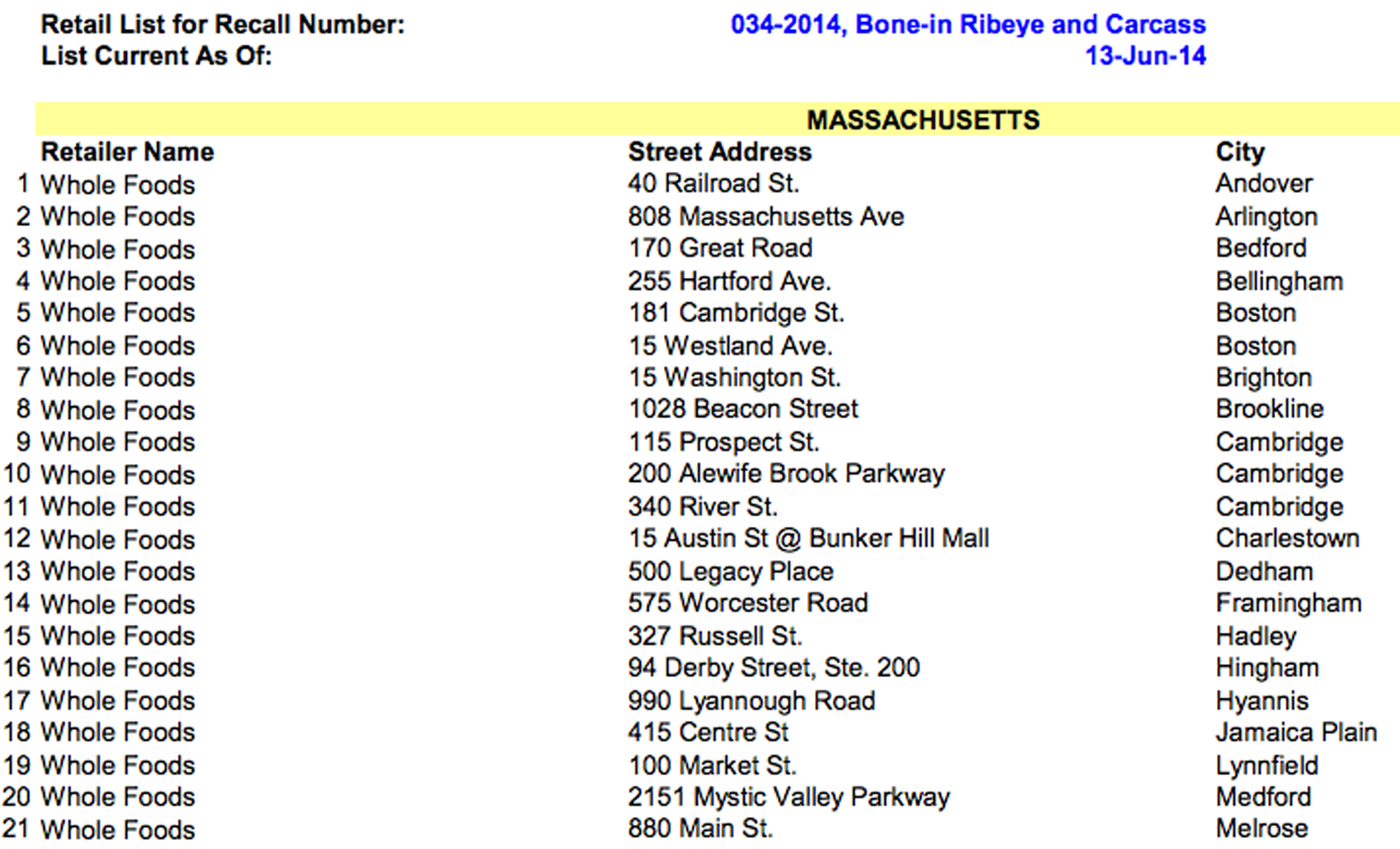 On June 11, the U.S. Department of Agriculture’s Food Safety and Inspection Service announced that Fruitland American Meat, based in Missouri, recalled approximately 4,012 pounds of fresh beef products because the products may have contained the dorsal root ganglia, a branch of the cattle’s nervous system that may pose health hazards. Dorsal root ganglia must be removed from cattle before they are 30 months old, according to Food Safety and Inspection Service standards. The bone-in ribeye roasts in question were distributed to a Whole Foods distribution center in Connecticut and a restaurant in New York. 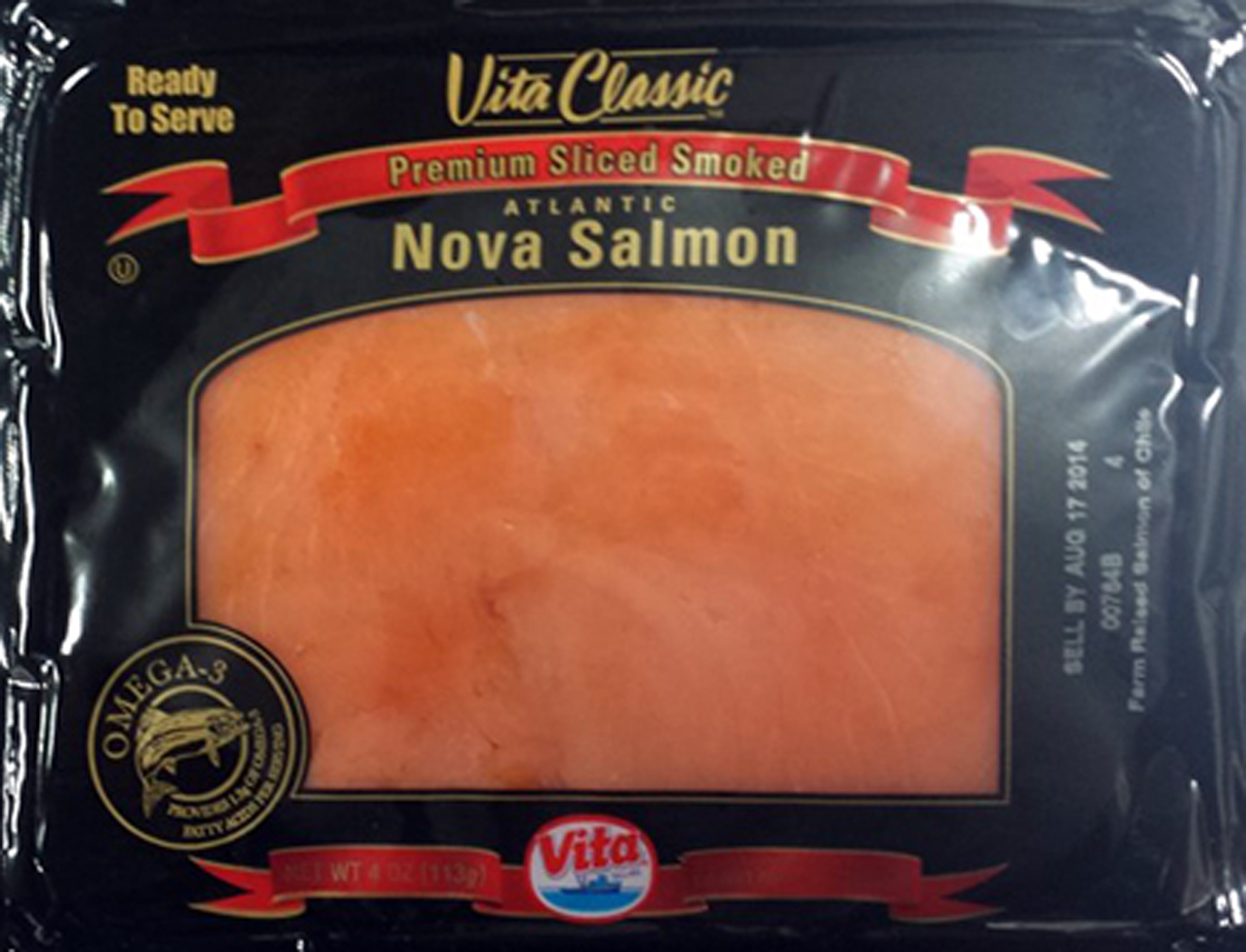 On June 16, the Food and Drug Administration announced that Vita Food Products Inc., based in Illinois, recalled 1,878 pounds of Vita Classic Premium Sliced Smoked Atlantic Salmon because of possible contamination of lysteria monocytogenes, a bacteria that may cause fatal infection. In a Florida Department of Agriculture and Consumer Services test, a single 4-ounce lot of the product tested positive for Listeria monocytogenes.

Federal food-safety agencies also announced that 19 people became ill because chia powder, an increasingly popular seed-based “super food,” was contaminated with Salmonella. At least two of those people have been hospitalized as a result of the Salmonella contamination.

The chia powder brands affected by the outbreak include Navitas Naturals and Health Matters Inc.

The Centers for Disease Control estimates every year there are 1.2 million illnesses with 23,000 hospitalizations and 450 deaths are attributed to the Salmonella bacteria.

Besides the E.coli and Salmonella outbreaks, Kraft Foods Group recalled 260 cases of Velveeta Cheese Original Pasteurized Recipe Cheese Product because the product did not have appropriate levels of sorbic acid, an ingredient used as a preservative.

The lack of sorbic acid could potentially cause the cheese to spoil early and trigger food-borne illness, stated a Food and Drug Administration news release on the recall.

The cases of cheese product were shipped to three Wal-mart distribution centers and may have been redistributed to Wal-mart stores in 12 Midwestern states. 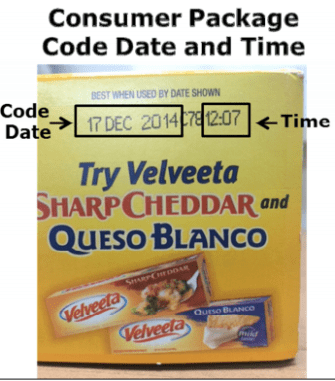 A Kraft news release stated that consumers should not eat the product and should return it to the store that they purchased it from for an exchange or a refund.

In May, Kraft Foods also recalled 1.2 million cases of cottage cheese because the cases were stored at unsafe temperatures.

In April, the company recalled 96,000 pounds of Oscar Mayer hot dogs because the United States Department of Agriculture’s Food Safety and Inspection Service found that “Classic Cheese Dog” products might have been in the “Classic Wieners” packaging. The mislabeling presented health concerns for individuals with food allergies.

Milk, a known allergen, was not listed on the product label.