Federal food-safety efforts will get an estimated $40 million boost under the 2015 spending bill.

Congress signed off on the 2015 Omnibus Appropriations package late last week, also avoiding a government shutdown. The new $1.1 trillion bill outlines how and where the government will use its money for the majority of the next year.

The more than 1,600-page spending plan provides the U.S. Food and Drug Administration nearly $2.6 billion – about $37 million more than the previous fiscal year. Legislators pegged the bulk of that increase to help further implement the Food Safety Modernization Act.

The bill also provides slightly more than $1 billion for the Food Safety and Inspection Service – about $5 million more than the last fiscal year.

The Food Safety Modernization Act introduced a series of reforms in 2011. Among the changes, it gave the FDA power to enforce recalls instead of relying on food companies to do so voluntarily. The act also called for more frequent inspections and new “science-based” standards.

“The funding provided will maintain more than 7,800 front-line inspection personnel for meat, poultry, and egg products at more than 6,400 facilities across the country,” stated a congressional summary.

For the critics who have spent the last year calling for increased oversight, the funding will help ease concerns stemming from several salmonella outbreaks and hundreds of major food recalls. The Centers for Disease Control and Prevention reported that, in just one salmonella outbreak linked to Foster Farms poultry, hundreds of consumers became sick and nearly two out of every five had to be hospitalized.

Overall, the bill provides more than $20 billion in agriculture-related funding.

A Midwest Center for Investigative Reporting analysis this month found that the FDA and Food Safety and Inspection Service – the nation’s two leading agencies on food safety – have announced nearly 300 combined recalls in 2014.

In September of last year, the U.S. Department of Agriculture had to send home tens of thousands of employees when the government failed to agree on a spending plan on time. 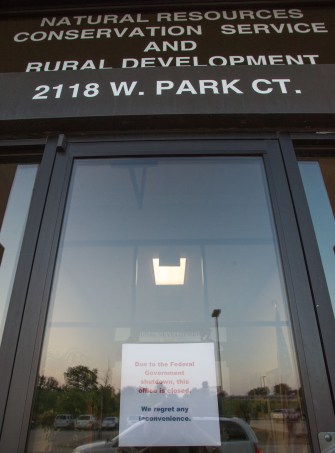 A sign explains the closed USDA offices in west Champaign, Ill., on Tuesday, Oct. 1, 2013. It reads: "Due to the Federal Government shutdown, this office is closed."

During the shutdown, the agriculture department and its nearly two dozen agencies were forced to operate at limited capacity or close down completely. The Risk Management Agency, which oversees the insurance that protects farmers’ crops, had to dismiss more than 430 employees. Similarly, the Farm Service Agency, which manages farm regulation and conservation, had to operate at less than 1 percent of its full employment capacity.

The FDA had to cease the majority of its food-safety programs, including routine inspections, laboratory research and the imported food oversight. As a result, the agency had to send about 7,000 of its workers home on furloughs.

The Food Safety and Inspection Service operated at about 87 percent normal capacity because meat, egg and poultry inspections were considered “essential.”

“That is what this shutdown will cause,” said Sen. Benjamin Cardin (D-Md) after the 2013 shutdown started. “Do we want to make sure we have a safe food supply? Well, today it is not quite as clear as it was yesterday.”

The approved 2015 bill will keep most the government running through the end of the fiscal year, Sept. 30, 2015. The Department of Homeland Security is the only government section not fully funded through that time.

“The American people deserve the certainty of a continuously functioning and responsible government, and the knowledge that both parties in Congress have heard their demands and have worked cooperatively on their behalf,” read a joint-statement released by appropriations committee chairs Sen. Barbara Mikulski (D-Md) and Rep. Hal Rogers (R-Ky).

The Midwest Center analysis found that there have been at least 58 food recalls this year linked to salmonella. The illness hospitalizes nearly 20,000 U.S. consumers a year and kills roughly 400, according to statistics from the Centers for Disease Control and Prevention.

A handful of recalls happened in the last month.

On Nov. 22, the Food Safety and Inspection Service announced that Minnesota-based Ranchers Legacy Meats Co. recalled 1,200 pounds of its ground beef products because they may be contaminated with a strain of E. coli. Shipped to stores nationwide, the affected products bear the establishment number “40264.”

On Dec. 3, the FDA announced that California-based Overhill Farms Inc. recalled its Open Nature Chile Cheese Enchiladas because the frozen-food product may be contaminated with salmonella. The company sold the product, which consumers can identify by the lot number “141006,” at Safeway-owned stores nationwide.

On Dec. 4, the Food Safety and Inspection Service announced that Nebraska-based Quality Meats Inc. recalled more than 44,000 pounds of Irish Meats pork belly that did not receive a mandatory import inspection. The company sold the pork to stores in Georgia, Illinois and Washington. Consumers can identify the products by the establishment number “IE 356 EC.”

On Dec. 9, the FDA announced that Florida-based Global Garlic Inc. recalled its De Mi Pais fresh curd products because they may be contaminated with the organism listeria monocytogenes. The company sold the products in Florida, Louisiana, Tennessee and North Carolina. Consumers can identify the products by the UPC code “896211002380.”