Researchers, students and agriculture industry leaders from around the world came to central Illinois this week to attend a conference focused on one of the most basic human needs — water.

The Institute for Sustainability, Energy and Environment hosted the “Water Planet, Water Crisis? Meeting the World’s Water-Food-Energy Needs Sustainability” conference at the University of Illinois at Urbana-Champaign. 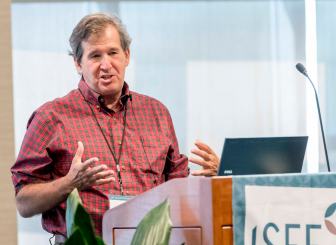 Water and agriculture have been at the forefront of public debate over the past two years, as drought conditions in California have forced policymakers to implement water restrictions and as the U.S. Environmental Protection Agency has made moves to further enforce water regulations on farms.

The agriculture industry is a leading cause of poor water quality, according to the EPA.

In conventional agriculture, the fertilizers and other chemicals farmers use can end up in small streams and large underground pools. These nutrients from agricultural runoff can then cause algae to grow too fast, sucking oxygen out of the water and suffocating fish and other aquatic species.

“I think the nutrient problem is first and foremost a public policy problem,” said James Shortle, an agriculture and environmental economics professor at Penn State University.

Shortle said outside of large-scale industrial agriculture, water quality on farms is not regularly monitored.

Additionally, he said conservation programs such as the U.S. Department of Agriculture’s Conservation Reserve Program – which recently had its funding cut by billions of dollars – give farmers technical and financial support, but do not solve environmental problems.

“I think we need to do something new,” Shortle said. “The states don’t have the regulatory programs that they need in order to get ag compliance.”

In the past, the agriculture industry and its lobbying groups have been largely opposed to government attempts to redefine or strengthen water regulation. 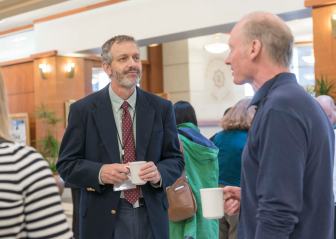 Conference presenter Mark David (left) talks with other attendees at the ISEE Congress 2015 in Urbana, Ill., on Sept. 15, 2015.

When the EPA and the U.S. Army Corps of Engineers proposed the Waters of the U.S. Rule, also known as WOTUS, the industry launched a campaign called “ditch the rule.”

The EPA set a goal for 2015 to reduce the amount of nitrate and phosphate that travels down the Mississippi River to the Gulf of Mexico by 45 percent.

It recently extended that goal to 2035.

“I think [the extension] demonstrates the difficulties of reducing nutrients on that scale,” said Mark David, professor of natural resources and environmental sciences at the University of Illinois. “We haven’t made much progress.”

As a researcher, David studies nitrogen and phosphorous biogeochemistry in agricultural fields. Part of that research is coming up with methods to reduce agriculture’s impact on water.

David was one of several who presented at the conference, where he discussed the role biofuel production can have on water quality.

Perennial and some biofuel crops are highly effective in nutrient reduction because their large root systems absorb nutrients and require very little to grow, David said.

If farmers planted cover crops on every acre of tile-drained corn and soybeans in Illinois, there would be a 20-percent reduction in nitrate-water contamination, according to David’s research.

The Illinois Nutrient Reduction strategy suggests farmers also use buffers to stop runoff along agricultural ditches, though only on a voluntary basis.

“What we end up with is this long list of things we might consider,” David said. “The agricultural community has really been trying to get across to farmers that everybody has to do something on every acre.”