Growing up, Ann Wolf didn’t frequent her grandfather’s eastern Iowa farm. In reality, nobody in her family ever lived on the 296 acres.

But over the past 17 years, Wolf’s relationship with the land has changed. No longer is the Miles, Iowa, farm simply a land investment.

Read the story on IowaWatch.org

Now, she sees the land as a part of nature, and makes decisions about her farm accordingly. Wolf introduced buffer strips to control soil runoff; developed a wetland to collect rain runoff and invite migratory birds; prioritized pasture maintenance; and began to restore a stream bank.

Her farm, in Jackson County three miles from the Mississippi River, is vulnerable to topsoil erosion. All of the measures she’s taken were with an understanding of the hilly landscape’s fragility and an acceptance that, without soil, food cannot be produced.

But Wolf’s practices are in many ways an exception to the rule when it comes to Iowa farms.

While average soil loss in Iowa falls closely in line with benchmarks set by the Natural Resources Conservation Service, some areas in the state are losing soil at more than 10 times faster than the soil renewal rate.

“What we are learning is that we have some areas in the state where soil loss on the hill slopes are greater than 30, 40, 50 tons per year,” Iowa State agronomy professor Rick Cruse said. “But still when we average across the state as the NRI (National Resource Inventory) has done, we get a statewide average of about 5 tons (of soil erosion).”

Ann Wolf uses several topsoil conservation practices at her eastern Iowa farm near Miles. Among them, she is restoring a stream bank.

The concern is that the erosion could affect crop production and Iowa's economy negatively.

Iowa ranked second in a report published earlier this year by the United States Department of Agriculture among the 50 states in the value of its agricultural exports. In 2013, the year covered in the report, the state’s agricultural exports were estimated at $10.2 billion.

Cruse created a soil erosion model that uses real-time rain estimates to determine how Iowa’s topsoil shifts. He and his team calculated the slope and length of the more than 400,000 fields across Iowa in 2014 and has been collecting land management practices annually.

One point of concern for Cruse is that NRI estimates do not take into account gully erosion. It should, he said.

“We don’t have a tremendous amount of confidence, but 30 to 40 percent of the soil that is lost we estimate is coming from these gullies,” Cruse said.

Typically soil loss variability is caused by precipitation as well as differences in the topography and slope of the land, Cruse said. But he also contends that the crops and methods of farming chosen are a major component.

Sarah Carlson, a Midwest cover crops research coordinator for Practical Farmers of Iowa, points to the fact that Iowa’s staple crops, such as corn and soybeans, are grown during the warm months. That can lead to land vulnerability because plants with root systems are not in the soil year-round, she said. This creates the opportunity, especially in the winter, for wind and water erosion.

Many farmers across the state are aware of these factors and have implemented conservation practices to mitigate the loss,according to the Iowa Farm Bureau.

Wolf found that because her Miles farm is located in a high bluff area her soil is sensitive and highly erodible.

“I think anything you can do to implement soil erosion practices is helpful,” Wolf said. “I’ve enrolled buffer strips and put up a retaining wall – anything I could do to control the soil loss.”

In other areas of state, the topography can look much different, which contributes to deciding how to maintain cropland.

Just as topography varies, the levels of conservation practices taking place vary across the state and between farms.

Cruse said: “You have some people on one extreme – the group that will die for conservation and make sure that this is done right. And on the other extreme you have the people that could seemingly care less. They have an opportunity to make more money in the short run than those who are taking land out of production to preserve the longevity of the land.”

This spectrum of practices is largely the result of an environment focused on production.

“Nobody wants to do a bad job, and in large part everybody thinks they are doing a good job,” said John Gilbert, the operator at Gibralter Farms near Iowa Falls. “The only downside is that there is no real concept of being a better farmer. One of the things that I learned early on is that conservation isn’t a one-and-done. It’s a matter of always making improvements, always looking for a better way.”

Farmers, like all humans, have a tendency to be creatures of habit, Gilbert said. This, coupled with the stress of production, has created a culture where yields are the measure of success.

“Farmers have bought into the attitude that they need to produce, and that production is the most important thing,” Gilbert said. “The real motivation behind that is that pretty much everybody all up and down the line that makes a living off crops feels better when there is a big crop. But if our soil is not maintained we won’t have the option of feeding anybody in the future.” 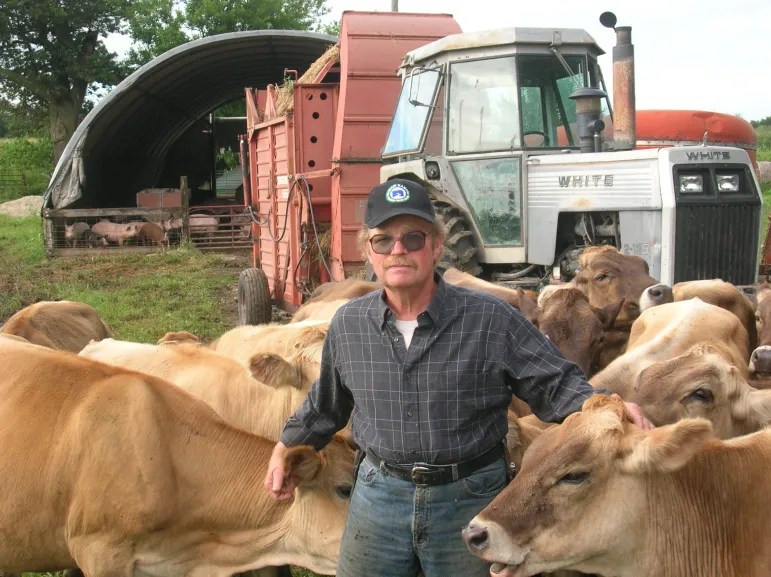 John Gilbert at his farm near Iowa Falls. He and his wife, Bev Gilbert, have a family dairy farm with row crops and raise pigs raised for Niman Ranch in Hardin County, Iowa.

Many economists say farmers would need incentives in order to shift farming culture from an emphasis on short-term production to that of long-term conservation.

Mark Rasmussen, director of the Leopold Center for Sustainable Agriculture in Ames, said some people believe sacrificing short-term production means the farming industry must move away from strictly how much money people can earn and take into consideration farming’s other effects.

A strategy presented by some economists involves making green payments to farmers as opposed to paying farmers for crops. These payments could in theory include financial incentives for anything from simply taking land out of production to growing different plants or crops that benefit the ecosystem.

This system requires people with influence in government—from the agriculture industry to lobbyists to members of Congress—to think in terms of something besides production, Rasmussen said.

Cruse said these types of incentive changes could alter the farming industry’s priorities, but would have to be done at a federal level.

“I am in favor of whatever it takes to keep the soil in place,” Cruse said. “But if we do these things as a state we create an unleveled playing field relative to farmers in other states.”

Consumer demand is the most likely source for a culture shift within agriculture, said farmers and agriculture experts with whom IowaWatch spoke.

“People are going to have to require a change,” Gilbert said. “If you look at organics as an example, if you look at how fast people are willing to pay extra for organics you can see this happening. When people speak with their dollars there is a response.”

The Iowa Center for Public Affairs Journalism's mission is to maintain an independent, non-partisan journalistic program dedicated to producing and encouraging explanatory and investigative journalism in Iowa, engaging in collaborative reporting efforts with Iowa news organizations and educating journalism students.

Learn more about the center at IowaWatch.org.