As soybean and cotton farmers across the Midwest and South continue to see their crops ravaged from the weed killer dicamba, new complaints have pointed to the herbicide as a factor in widespread damage to oak trees.

Monsanto and BASF, two of agriculture’s largest seed and pesticide providers, released versions of the dicamba this growing season. The new versions came several months after Monsanto released its latest cotton and soybean seeds genetically engineered to resist dicamba in 2016.

Since then, farmers across the Midwest and South have blamed drift from dicamba for ruining millions of acres of soybeans and cotton produced by older versions of seeds.

Now, complaints have emerged that the misuse of dicamba may be responsible for damage to oak trees in Iowa, Illinois and Tennessee.

“I’ve seen (pre-planting damage) year after year after year,” Nelms said of dicamba’s effect. “I’ve been seeing these signs for 40 years. To me, it’s just obvious.”

But Monsanto officials have said publicly that crop damage is caused by misapplication of dicamba or the sale of the herbicide under other labels.

BASF spokeswoman Odessa Hines said the company is aware of issues with oak trees and encourages growers to contact the company with any concerns.

“We don’t believe volatility is a driving factor based on past research and experience. For Engenia herbicide to receive registration from federal and state authorities, including authorities in Illinois, we conducted and submitted results from a wide range of studies needed to fulfill regulatory requirements,” Hines said.

But, in the cases of oak tree damage, internal Monsanto emails indicate that the company has tried to shift blame away from dicamba to other pesticides.

The emails were written by company lobbyists who shared them with the Illinois agriculture department. The emails were obtained through a Freedom of Information Act request.

Damage rises as weeds become resistant to Roundup
An increasing number of weeds have become resistant to glyphosate, the most widely used weed killer in agricultural production commonly known as Roundup.
In response, farmers are augmenting Roundup with other weed killers, like dicamba and 2,4-D. Both are becoming more commonly used to kill weeds before crops are planted, when trees are most susceptible to damage.
Lou Nelms, a biologist who formerly worked as a research assistant at the University of Illinois and operated a prairie seed nursery, has gone across Illinois tracking much of this damage and filing complaints with the Illinois departments of agriculture and natural resources.
He filed his first complaint in May about damage at his home in Mason County.

The Monsanto correspondence followed Nelms filing complaints with the department.

Nelms filed one of his complaints, on the morning of August 16, with the Department of Natural Resources about dicamba damage to oak trees at the state nature preserve Funk’s Grove.

Funk’s Grove, about 10 miles south of Bloomington, Illinois, is one of just 654 undisturbed natural areas in the state of Illinois. The 25-acre forest is famed for its sugar maples and the syrup they produce. The nature preserve, a popular destination along the famed Route 66, is also home to oak trees hundreds of years old.

But this year, the leaves on the historic oak trees “cupped” and died, exhibiting clear signs of harm from either 2,4-D or dicamba, which is the most widely used weed killer of this type, Nelms said. 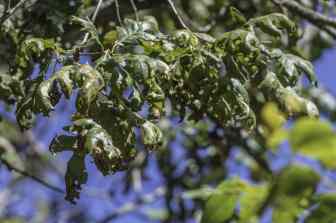 Williams wrote that they told him that Illinois was starting to receive complaints about oak trees being damaged by herbicides.

Later in the day, Tierney sent an article written by Iowa State professor Robert Hartzler, writing,“Here is a good piece that really quieted the situation here in Iowa. Ironically I just talked to the head of Iowa DNR about it again today.”

Hartzler’s published his article in June as a response to media reports of about 1,000 complaints in Iowa about oak tatters, another condition where oak leaf tissue disappears along the veins. The condition, present in oak trees since the 1980s, has been linked to another Monsanto weed killer called acetochlor getting absorbed in the atmosphere and falling as rain on oak trees, according to University of Illinois research.

Hartzler wrote that the oak tatters damage was so much more severe than in past years, even though less acetochlor was being used. He said it was likely something else was causing the damage but did not mention dicamba.

In an interview with the Midwest Center, Hartzler, a weed scientist, said his article was about oak tatters and not dicamba damage.

Hartzler also said the damage cited in Nelms’ complaints was likely caused by dicamba, or another herbicide, 2,4-D.

Three months later, Hartzler said he still isn’t sure why the oak tatters were so widespread. He does not believe it is dicamba or acetochlor but he has no idea why it's so bad.

“I don't think we have any idea what the cause is and maybe it's acetochlor, but it just doesn’t make sense to me,” Hartzler said.