State agriculture departments across the Midwest and South received thousands of complaints from farmers last year who blamed the herbicide dicamba for widespread damage to their crops.

Agriculture researchers estimate that more than 3.6 million acres of soybeans alone were damaged by the weed killer during the last growing season.

The damage stemmed from the introduction by Monsanto of a GMO soybean seed that was resistant to dicamba. But many farmers were not using that seed and so their crops suffered when the herbicide drifted into their fields.

For farming communities in the Midwest, dicamba did more than damage crops – it created tensions between friends and neighbors and raised questions about how state officials and makers of dicamba - Monsanto and BASF - responded to the problem.

The Midwest Center for Investigative Reporting has been providing important regional coverage of this national story.

Join us for a panel discussion featuring weed scientists, industry leaders and community members as we delve into the issues that arose with dicamba. There will be time after the moderated panel for an audience Q & A session.

The event is free but RSVP required. Light refreshments will be served.

Want to learn more ahead of the discussion?

Below, you will find background information on the topic along with links to our reporting.

Much to the frustration of many farmers, weeds can quickly become resistant to the herbicides used to combat them. This has been the case for years with the weed killer glyphosate, more commonly known as Roundup. Glyphosate’s decreased effectiveness on soybean fields led the agriculture company Monsanto to engineer a new seed variety that is resistant to both glyphosate and, a less frequently used herbicide, dicamba.

Monsanto touted the rollout of its new soybean seed, Roundup Ready 2 Xtend, as a major victory against “super weeds,” because it allowed farmers to spray new dicamba formulations on their fields to kill weeds that had become resistant to other herbicides, without harming their Roundup Ready 2 Xtend beans.

While dicamba has been on the market for more than 50 years, the new formulations (Monsanto’s Xtendimax, DuPont’s FeXapan and BASF’s Engenia) came under scrutiny last growing season after farmers said the products accidentally drifted on to neighboring fields, causing damage to neighbors’ crops that did not have the Xtend trait. 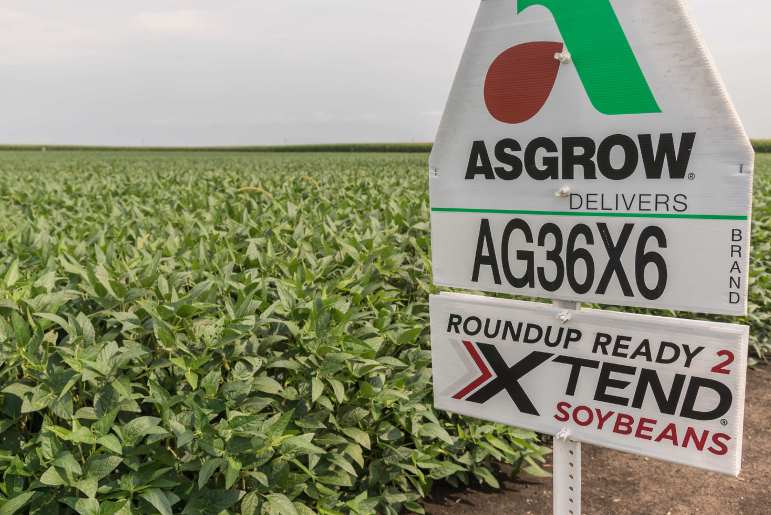 Complaints of pesticide misuse increased in 2017

Dicamba is volatile, meaning it can easily change from liquid to gas and move unpredictably under certain weather conditions. New formulations of dicamba were billed as “low volatility,” but agriculture departments across the Midwest and South received more than 2,708 complaints in 2017 (approximately 245 complaints in Illinois) from farmers who said the new products had moved off-target, according to data compiled by University of Missouri weed scientist Kevin Bradley.

Soybeans that are not genetically resistant to the herbicide are particularly susceptible to damage. More than 3.6 million acres of soybeans alone were affected by dicamba in the U.S. last year. At least 600,000 acres were injured in Illinois, according to state extension weed scientists. There have been additional reports of damage to oak trees, home gardens, grapes and vegetables in Illinois and other states. 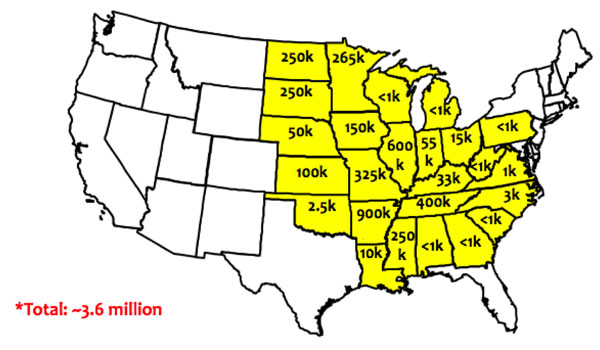 Estimates of dicamba-injured soybean acreage as reported by state extension weed scientists as of October 15, 2017.

How agriculture officials and the U.S. EPA responded to the problem

The EPA made the following changes to dicamba product labels in October 2017:

Other states, such as Arkansas and Missouri, imposed additional restrictions by outlawing dicamba application during certain peak spray months.

What the companies say: Applicators didn’t follow the label, and more training can address issues

“Our new dicamba formulation is unique because it reduces volatility potential by 90% compared to older dicamba formulations like Clarity … The main causes of off-target movement of XtendiMax® with VaporGrip® Technology are things like inadequate buffers, unapproved nozzles, and wrong boom height. Importantly, all the reported factors are addressable through training and following the label instructions…

Beyond the label enhancements, we are taking a variety of steps to help our customers use this weed management system successfully in 2018, including:

“The technology came to market after years of research that demonstrated the lower volatility of BASF’s Engenia® herbicide. This was reviewed by the EPA and the University of Arkansas weed scientist.” - BASF Statement on Arkansas Dicamba Task Force Recommendation

Sponsored by Illinois Humanities, a private 501(c)(3) state-level affiliate of the National Endowment for the Humanities with support from the Robert R. McCormick Foundation.

Other sponsors include the  Knight Chair of Investigative Reporting, Journalism Department at the College of Media, University of Illinois Urbana-Champaign and CU-CitizenAccess, a community online news and information project based at the University of Illinois College of Media devoted to investigative and enterprise coverage of social, justice and economic issues in east central Illinois.