Feeding the world’s growing population may prove to be a challenge for farmers everywhere.

By 2050, experts estimate that there will be 9 billion people to feed and discussion has started on the best ways to do just that.

The U.S. and Russia are two of the world’s top grain-producing countries and according to the U.S. Department of Agriculture - Russia will provide 22 percent of the world’s grain exports by 2021

But how, exactly, do farmers in each of these countries provide food for the masses?

While U.S. farmers have the option to bypass the elevator and sell directly to a merchant, that is not the case in Russia, the world’s third largest producer of wheat.

But allowing Russian farmers the chance to sell directly could reduce their risks and increase their profit margins.

Yuri Parshukov, Trade Union director in Rostov, said farmers stand to gain as much as $20 per ton from direct sales to foreign merchants.

Russian farmers could also avoid the danger of making a bad deal with traders who sometimes refuse to pay up.

“We knew a very trusted mediator in Egorlyk, Rostov region, who worked well, but then it owed each of the farmers several million rubles and disappeared,” said Nikolay Popivnenko, chairman of a farmer’s cooperative in the Rostov region.

Plunk  is in charge of marketing the commodities at his family's 5,000 acre farm, and only sells their product indirectly, through grain elevators. But he too lamented the unreliability of selling to a middleman. 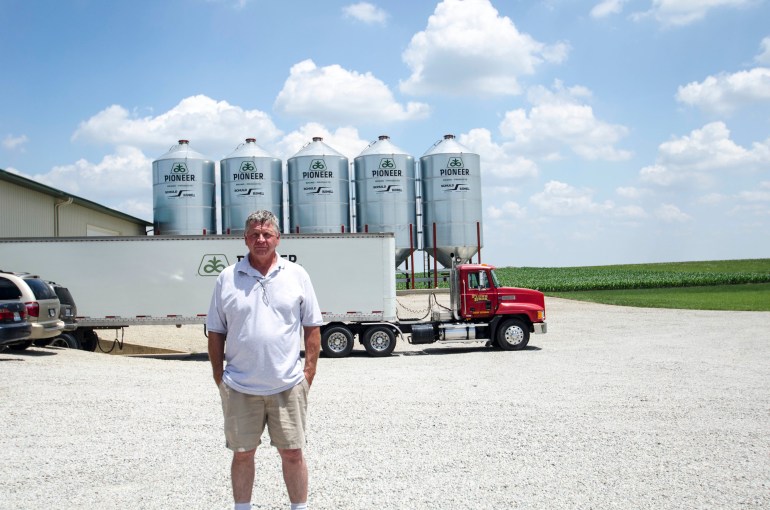 David Plunk posing for photo on the Plunk Brother's family farm in Farmer City, Ill., on June 19, 2013, where he is in charge of selling their commodities

“There have been times when local grain elevators...have gotten themselves into financial difficulties and take possession of your grain and don’t have the ability to pay you.”

Several states in the U.S. have insurance protections in place in the event that a grain elevator doesn’t pay. These programs repay farmers a percentage value of their grain lost. In Plunk’s home state of Illinois, farmers are repaid up to 80 percent of the value of their product.

Russian farmers are not so lucky.

“The only thing farmers could do was find a new way [of selling] or [another] company to sell their goods,” said Popivnenko.

To protect themselves, U.S. farmers will often look over an elevator’s annual financial report before they choose to do business with them.

But because of the insurance programs, reliability of payment is not the most decisive factor when choosing which elevator to work with. Plunk said he looks at the price offered and the distance of the elevator from the farm.

Regardless of country, the process of selling indirectly requires the farmer to develop a trustworthy relationship with the trader they are working with.

“You become loyal to them,” said Plunk who works exclusively with four grain elevators in his area.

“Honesty and timely payment are really important,” said Alexey Zhdanov. “We treasure these kinds of partners and advise them to our friends.”

Higher profits may not be worth it

Despite the perceived benefits, some Russian farmers are not keen on the idea of selling directly.

"We had the experience supplying wheat directly to Mediterranean countries in 2009. We came to the conclusion that it's not worth the trouble,” said Sherefetdin Kahrimanov, Director of the Kirov Common Joint Stock Company.

“The main difficulty is that farmers do not have their own shipping point.”

Lack of sufficient transportation and large storage bins are other hurdles keeping Russian farmers from selling their grain directly.

Transporting grain to port or to the buyer can be very costly and hard to coordinate for farmers with few connections to merchants.

“You spend all your earnings on logistics,” said Kahrimanov.

In 2004, the German-based trading and transportation company A.C. Toepfer International entered the Russian agricultural market promising to be one of the first companies to buy grain directly from Russian producers. The company has since established a port in Ukraine as well as various transport lines and offices in Russia, but Toepfer has failed to deliver on its promise of buying directly.

To Toepfer’s credit, buying directly from farmers is not always the most efficient route for large processing companies.

“Honesty and timely payment are really important. We treasure these kinds of partners and advise them to our friends.” - said Alexey Zhdanov

The brokers used in indirect selling are useful to the farmers for logistical purposes, but they are also beneficial to merchants in that they streamline the buying and selling process by checking a farm’s documentation and doing quality tests on the grain.

Merchants are also able to buy much larger quantities of grain from brokers, who have connections to multiple producers, than from single farmers, who have a limited amount of grain.

In the U.S., the average farm size is about 421 acres, according to U.S.Department of Agriculture.

Toepfer is affiliated with and owned almost entirely by the agribusiness giant, Archer Daniels Midland (ADM), which is based in the small U.S. town of Decatur, Ill.

In Decatur, farmers have sold directly to ADM and other manufacturers in the area for years.

Brothers David and Joe Brown are two such farmers, and while they have succeeded at selling their products directly, they are not representative of the majority of U.S. farmers. Working directly with major sellers is more common in the U.S. than in Russia, but the direct selling process is burdened with the same problems in both countries. 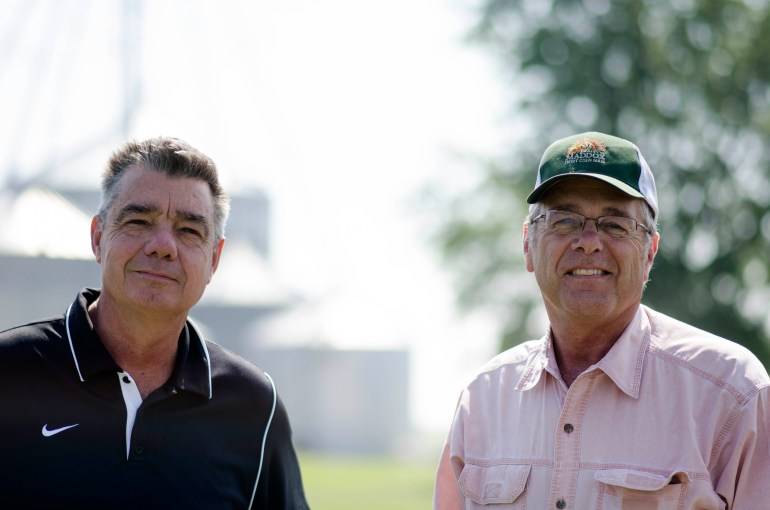 David (left) and Joe (right) Brown, brothers, pose for a photo on their family owned and operated centennial farm in Decatur,Ill., on June 19, 2013.

“There’s a lot of risk associated with direct marketing,” said David Brown. “The elevators take a large margin--a substantial margin. We get that money if we sell direct, but we are assuming all of the risk.”

As in Russia, U.S. farmers must get their grain to pass a quality inspection.

Because they are direct sellers they run the risk of it not making the grade when they deliver it to the buyer.

“We’ve had some aflatoxin issues in the past years,” said Joe Brown. “That’s scary, because when the corn doesn’t pass, we have to take it home.”

In this situations the Browns are still obligated to deliver on their contract in some form. This could mean buying the contract back or blending the product with other grains until it reaches a passable quality level--both are costly options.

Transportation and storage, as in Russia, are the most prevalent barriers to direct marketing.

The Browns are fortunate-- they live roughly 15 miles away from ADM. They have also invested heavily into buying their own grain storage which eliminates the need to store their grain at the local grain elevator.

“Our father started putting up grain storage forty years ago. Joe and I kept that same idea,” said David Brown. “Tractors, combines--they depreciate. The bins will continue to give you a rate of return for 50 or 60 years.”

Even though the Browns sell directly to ADM, they are still quick to acknowledge the benefits of working with grain elevators.

“If you go to the country elevator, you’re done with it,” said David Brown.  “They manage the storage; they manage the delivery. And that’s why they charge what they charge, because now the risk is in their hands.”

The extra charges incurred by working with a third party, while a detriment to the farmer’s profits, are perhaps worth it.

In the U.S., where the option to sell directly is there, more farmers are still using grain elevators.

In Russia, some farmers don’t seem to mind paying the extra money to brokers.

“It saves our time: we don't have to load the goods in the truck. We don't have to stand in a queue,” said Zhdanov. “I think farmers should plow the land and merchants should grain trade."

This article was co-reported by the Krestianin newspaper (based in the southern Russian, river port city of Rostov-on-Don) and is part of the “Common Stories Project,” an initiative sponsored by the Washington, DC-based Eurasia Foundation to document common social challenges faced by both the United States and Russia.

This and other stories including side-by-side profiles of veterans of both countries’ wars in Afghanistan and how Americans and Russians are working together on the issue of child abandonment will be edited for publication by the Missouri School of Journalism’s “Global Journalist" this autumn.