On a clear fall day in central Iowa, Aaron Lehman climbed into the cab of his green combine with a screwdriver to do some maintenance. He was hoping his corn had a couple more weeks to grow before harvesting, because the price per bushel this fall is much lower than it has been for the past three years.

Corn farmers have been riding high prices for the last few years. But an expected bumper crop has prices falling this harvest season, and many economists expect the price of corn to drop to its lowest level in recent years.

Listen to the story on Harvest Public Media

Corn is the country’s largest commodity crop in acres planted. It’s grown on about one-third of all cropland in the United States. Most of us probably encounter it every day. But the impact a drop in corn prices has on you largely depends on how far from the field the corn is when it gets to you.

Grain farmers like Lehman, of course, get hit the hardest, with lower gross income from corn sales. But Lehman said he knew the recent sky-high corn prices were temporary.

Lehman said he tried to make big purchases and keep up with equipment repairs while the money was good -- really good.

For the second half of the 20th century, prices for corn -- adjusted for inflation -- stood right around $2 a bushel. About five years ago, they started to climb.

“When we said [in 2007 or 2008] that they were going to $4 because of the great expansion of the ethanol industry, we were laughed at,” said Iowa State University economist Bruce Babcock.

But the price shot right past that marker and in some places last year, thanks in part to a cramped supply resulting from the drought, farmers got over $8 a bushel.

That was great for crop farmers, but for those raising chickens, cows and pigs it meant feeding animals cost a whole lot more than they were used to.

Iowa farmer Jeff Longnecker grows much of the feed for his cattle. But in dry summers -- like the past two -- he has had to buy some. And last year, that hurt.

But today, with corn down around $5 a bushel, he said he’s trying to grow his herd.

Beyond animal feed and ethanol production, a lot of corn goes into processed food. Corn is also found in carpet, paper, soap -- even in couch cushions. And Babcock, the economist, said there’s no risk of shortage.

“The reason why so much land is planted to corn is because it’s the most profitable crop that is out there,” Babcock said.

And as long as corn remains abundant and relatively cheap, the items we buy are not much affected by the price of a bushel of corn. That’s because every stop between the farm and the final consumer adds a buffer.

Stops at places like Ajinomoto’s corn processing plant in Eddyville, Iowa, a red- and beige-striped building off a state highway in a rural part of the state. Ajinimoto makes the flavor enhancer monosodium glutamate, or MSG, using the sugar in corn as a raw ingredient. General manager Jeff Peyton says the company buys corn straight out of the field, but not a single kernel enters his building. Instead, the grain makes a stop on the way at a larger processing company across the street, which mills it and separates out for Ajinomoto just the parts the company needs.

“They process the corn. Then by pipeline we receive the part of the corn, the dextrose, the glucose, that we would need here at the plant for our fermentation operation,” Peyton said.

There is a visible pipe coming out of the other plant, which then disappears under the highway and comes out again on the other side, wending its way into the Ajinomoto building. Inside, the industrial-scale fermentation process takes about a week to convert the sugar, with a few additional ingredients, into MSG.

“About 3 percent of our product goes into retail, directly out to the customer,” Peyton said. “So that means 97 percent is mostly in bulk form.”

The bulk product can leave in fiber drums or one-ton totes. But often, it’s shipped in 50-pound bags, which are stacked by a mechanical arm onto shipping pallets in the packaging and warehouse area of the factory. Peyton said the bulk MSG will make at least one more stop on the way to a consumer -- either in a restaurant kitchen or at another food processor.

With each stop, the impact of corn’s commodity price diminishes. On the consumer side, economists describe prices as sticky -- meaning they creep up gradually, but they rarely come back down. 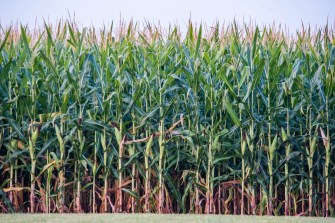 Corn near Mansfield, Ill., on Tuesday, August 20, 2013. This year, the price per bushel of corn is expected to plummet from the nearly $8 levels of recent years.

“Corn as a share of the final retail food dollar is so small that you can even double corn prices and it’s going to have a fairly muted effect at the retail level,” Babcock said.

But back in the field, Jeff Longnecker said the commodity price will influence what gets planted next year. With corn paying less, he said, he expects farmers to increase soybean acreage.

“Don’t misunderstand me. They’re going to continue to plant corn, there’s no doubt,” he said. “We’re a corn nation. Corn is king.”

But if farmers reduce the available supply, the commodity price should head back up. Even then, though, consumers will have their cheap snacks and soda -- and little concern for market forces.