Scott Murray did not want to leave the home in rural Juneau County, Wis., where he and his family had lived for more than 20 years. But with the house surrounded on three sides by manure irrigation systems, life had become a nightmare.

“It even got into the walls of our home,” Murray said of the liquid manure spray that drifted onto his property from the Central Sands Dairy across the road. “It was an ammonia smell. It hurt so bad even to breathe.”

This story is part of Water Watch Wisconsin, A Wisconsin Center for Investigative Journalism project that examines state water quality and supply issues.

In 2011, the Murrays sold their house and moved.

“And it’s a good thing,” Murray said, “because my property wasn’t worth a nickel.”

Life for the Murrays, along with other Wisconsin families, has been disrupted by the relatively rare practice in Wisconsin of using water irrigation systems to spray liquid manure on farm fields.

Now the issue has taken on new urgency as other large dairy farms consider using the practice. A work group formed by the state Department of Natural Resources and run by the University of Wisconsin-Extension is completing a study and beginning to weigh whether to toughen regulation of manure irrigation. Its initial report is due by fall. The practice is regulated under current law with restrictions on spraying too close to homes and wells.

Some research suggests that the chemicals and pathogens found in liquid manure can have serious health impacts, ranging from respiratory disease to potentially lethal antibiotic resistant infections. Opponents fear wider use of manure irrigation will increase the risk of human illness and drinking water contamination.

Critics also question the ability of the Department of Natural Resources, relying mostly on citizen complaints and self-reporting by the huge dairies, to adequately regulate a practice that has already been shown to pollute waters and drive people from their homes. 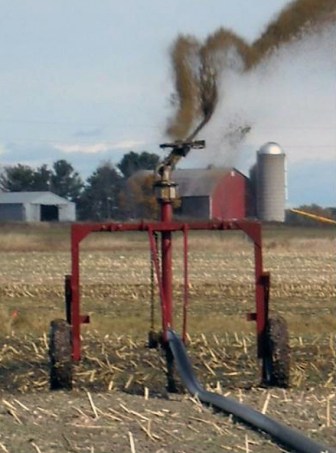 Provided by the Wisconsin Department of Natural Resources

Another form of manure irrigation involves using a single nozzle system such as this one.

Such concerns have prompted officials in Wisconsin’s Adams County to pass a moratorium against the practice.

It is also an issue elsewhere in the country.

In Minnesota, according to the Wisconsin Department of Natural Resources, 10 counties prohibit manure irrigation.

In North Carolina, 95 percent of the swine farms use manure irrigation. Fish kills and pollution prompted state officials to ban the practice on new or expanding CAFOs, and farms now must follow much more restrictive regulations. In Michigan, a company shut down its mega-farms after violations and lawsuits related to the flawed use of manure irrigation.

Applying liquid manure to fields using pipelines and farm irrigation systems is less expensive than trucking manure and applying it with traditional land-spreading rigs. Proponents also say it is less likely to pollute because it allows for more precise application of manure, which provides necessary nutrients to the soil. And runoff is less likely when manure can be applied when crops are in the field, they say.

Currently, 14 of the state's industrial-sized dairy farms, also called Concentrated Animal Feeding Operations, or CAFOs, use manure irrigation, according to the Department of Natural Resources.

That number could rise dramatically. Wisconsin has 258 dairy farms categorized as CAFOs.

“We’re getting more and more requests in the department to use the technology,” said Andrew Craig, a Department of Natural Resources water-resources specialist who is working with the manure irrigation group.

The issue is tied inextricably to the controversial spread of CAFOs across the Wisconsin landscape. The farms produce overwhelming amounts of manure and have angered and frustrated nearby residents who feel they have little control over the growth and operations of the industrial farms. Cattle on Wisconsin farms produce as much waste each year as the combined populations of Tokyo and Mexico City, according to calculations by Gordon Stevenson, a retired former chief of the Department of Natural Resource's runoff management section.

“It was an ammonia smell," said Scott Murray. "It hurt so bad even to breathe.”

The department's advisory work group is examining studies of manure irrigation, weighing the still-uncertain science of potential impacts. The group’s role is advisory and carries no legal weight but could eventually recommend best management practices or changes to regulations.

But, in the meantime, the DNR continues to grant approvals for CAFOs to use manure spraying, once even exempting an applicant from current regulations, according to a legal challenge. Critics doubt the work group will ban the practice, given that the push to expand it is coming from big agricultural interests.

“I get the feeling that it’s just a matter of how we’re going to do it, not whether it is going to be done,” said Lynn Utesch, who runs a small farm in Kewaunee County and is a vocal opponent of CAFOs.

In one of the most controversial permits, the Wisconsin Department of Natural Resources approved the use of manure irrigation by Ebert Dairy Enterprises in Kewaunee County. With a recent expansion, the dairy will generate and spread or spray more than 55 million gallons of liquid manure and wastewater a year on fields.

According to a legal challenge from 10 Kewaunee County residents, the department exempted the operation from safeguards in current law, including a rule that prevents spraying on fields with soils that are too shallow. Craig denied that such exemptions were granted. He argued that soil depths on the fields in question are adequate.

Ken Genskow, an associate professor at the University of Wisconsin-Madison who chairs the work group, said it is focusing closely on the issue of manure irrigation rather than broader CAFO issues. He said the group is committed to a thorough, objective review, weighing benefits and potential health and environmental impacts.

“The trick with this,” Craig added, “will be to maximize the benefits and minimize the problems.” 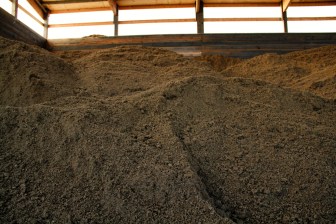 Manure solids, dried fluffy and no longer smelly, are used as bedding for cows at Holsum Dairies, or they become mulch for local gardeners.

“Admittedly, on its face it sounds like a bad idea,” Genskow said of manure irrigation. “It’s an issue people make up their minds about before they know everything about it.”

Genskow said he has come to appreciate some of the benefits of the practice, including the ability to better control the application of manure.

This is actually the second incarnation of the study group. It was reorganized by the department last year after critics complained that the first panel was stacked with CAFO operators and other supporters of manure irrigation. The new 18-member panel, which has been meeting since July, includes scientists, public health officials, agronomists, CAFO operators and their critics, such as Utesch.

The study group includes Kenn Buelow, dairy manager and part owner of Holsum Dairies, two CAFOs in northeastern Wisconsin near Hilbert. Holsum was named a 2012 winner of the U.S. Dairy Sustainability Awards. Buelow said the farm uses center-pivot manure irrigation because it is cheaper and better for the environment.

Because manure is piped to the irrigation units, the use of large trucks that damage roads is unnecessary, Buelow said. He also noted that manure can be applied to growing crops during the growing season instead of being spread on bare fields, reducing the chances of excess manure running into streams and seeping into groundwater.

“I think there are a lot of benefits for water quality,” Buelow said.

For Scott Murray and his family, being surrounded by Central Sands Dairy’s manure irrigation systems proved too much to bear. The smell and the ammonia from the liquid manure was so bad that his son refused to bring Murray’s grandchildren to visit.

“He said, ‘Dad, I’m not bringing the kids over here anymore,’ ” Murray recalled. “And we had to move because my grandkids are my life.”

Like Murray, Diane Miller lived across the street from Central Sands Dairy in Juneau County, not far from the city of Nekoosa. Miller and her husband, Ray, lived in the home for years before Central Sands Dairy was built on the site of a former vegetable farm.

Life changed for the Millers after the arrival of Central Sands in 2007, along with its thousands of cows and large manure storage lagoon. Miller recalled a smell almost too powerful to endure.

“We had so many flies it was like that scene from ‘The Exorcist,’ ” Miller said.

But Sommers defended the farm’s continued use of manure irrigation. He said it now uses a biodigester that reduces the level of pathogens in the manure. He also said the farm follows a nutrient management plan, required of all CAFOs, that prevents over application.

“We do a good job of managing our manure,” Sommers said.

Sommers said manure irrigation allows operators to spread applications over the course of the growing season and “allows us to apply at the right time and in the right amount and with the least impact to the environment.”

For her part, Diane Miller is happy now to be resettled, far away from the dairy in Nekoosa, though her husband, Ray, has since died of cancer.

When Miller thinks of him, she thinks of the house in the country where they lived for so many years. She misses the happier days there.

“It was our home,” she recalled. “It was where I lived with my husband. But it was unpleasant for me to live there anymore.”

This story is part of Water Watch Wisconsin, a project examining water quantity and quality issues across the state. The nonprofit Wisconsin Center for Investigative Journalism (www.WisconsinWatch.org) collaborates with Wisconsin Public Radio, Wisconsin Public Television, other news media and the UW-Madison School of Journalism and Mass Communication.
All works created, published, posted or disseminated by the Center do not necessarily reflect the views or opinions of UW-Madison or any of its affiliates.