Experts predict that the agriculture industry may soon account for roughly half of all drone flights in the United States.

As part of that trend, farmers from across the country gathered in central Illinois this week for the Precision Aerial Ag Show, a showcase of unmanned aerial vehicles, otherwise known as drones. 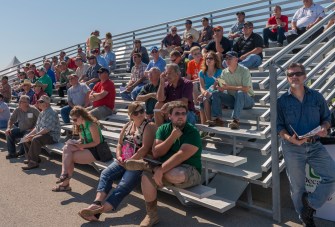 Stu Ellis, the event’s organizer, said people from more than 30 states and at least six foreign countries came to the two-day show in Decatur. Organizers estimated attendance totaled more than 1,000.

“The turnout today shows a great interest of farmers trying to advance the technology on their farms to make it more efficient,” Ellis said on Wednesday.

This reflects the growing popularity of drone use in farming, a practice becoming standard as farmers seek more efficient ways to survey their fields and evaluate plant health.

Read also: "States restrict drone use because of privacy concerns"

“Just a tick under half of all U.S. flights over the next ten years are going to involve our industry, period,” said Chad Colby, unmanned aerial systems expert who runs the website AgTechTalk.com. “We’re the big player.”

A Department of Transportation Office of Inspector General audit released last month reported that there will be about 7,500 active unmanned aircraft systems flying throughout U.S. skies within the next five years. 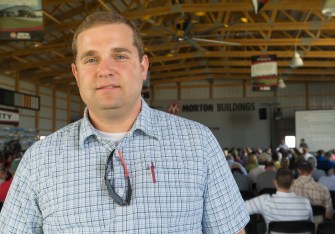 Randy Aberle farms corn, wheat and soybeans in Gibson City, Ill. He spoke on a panel of farmers at the 2014 Precision Aerial Ag Show.

Randy Aberle grows corn, soybean and wheat in Gibson City, Ill. Aberle said he has long been flying drones above his farming operation for a variety of tasks.

Graff said that drones are worth any costly investment they may require because the aircrafts reassure farmers they are keeping up with what is going in their fields through the information they collect.

For example, by using a drone, she said, farmers could quickly evaluate whether there are problem areas in their fields.

Despite the growing enthusiasm demonstrated by the farmers and drone hobbyists in attendance, drone advocates familiar with Federal Aviation Administration rules argue that regulation is currently murky and often restrictive. 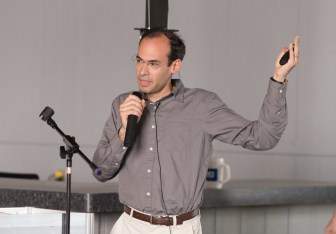 During a session on the legalities of drone use, attorney Brendan Schulman of Unmanned Aircraft Systems law group pointed out contradictions in airspace regulation. Other speakers included Rory Paul of Volt Aerial Robotics.

In general, hobbyists using drones for strictly domestic, non-commercial purposes are allowed to pilot their drone below 400 feet, according to the current aviation administration national policy.

Commercial use of drones, on the other hand, is prohibited without direct authorization from the aviation administration at any altitude. Additionally, even if commercial users are cleared to fly drones, operators must be able to see the drone at all times.

Those commercial rules are contradictory, according to Brendan Shulman, head of Unmanned Aircraft Systems law group, a branch of Kramer Levin Naftalis & Frankel LLP, which has offices in New York, California and Paris.

Shulman said there should not be any difference between putting up a windmill or flagpole on private property and flying a drone in the same airspace.

“What is the difference between putting up that flagpole with a camera on it, or a crane, versus using something that uses propellers,” Shulman said. “You’re basically using the same airspace, but a different kind of device to get there.”

Furthermore, about half of all U.S. states – including the Midwestern states of Illinois, Indiana, Iowa, Wisconsin and Minnesota – have some form of a privacy law that restricts drone use, an American Civil Liberties Union analysis found.

Illinois specifically has a privacy-protection law that guards against drone surveillance. 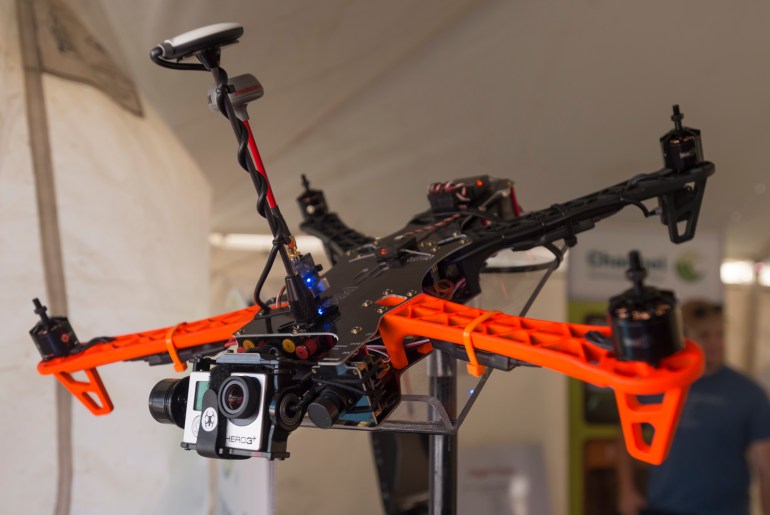 A drone, otherwise known as an unmanned aerial vehicle or unmanned aerial system, from the Crop Copter company at the 2014 Precision Aerial Ag Show in Decatur, Ill. A hobbyist-level drones can be as cheap as $250 dollars, while a top-of-the-line commercial drone can cost more than $100,000.

Read: FAA statement on drones in agriculture Using UAS (unmanned aerial systems) for precision agriculture falls under two categories: application of fertilizer or pesticides and crop monitoring. Work is underway to implement the provisions of Section 333 of the FAA Modernization and Reform Act of 2012 to move forward with incremental UAS integration.  This section of the Act may only be applied to specific, limited, low-risk uses in advance of the small UAS rule.  The FAA is still evaluating this option. Companies from four industries have approached the FAA and are considering filing exemption requests which would begin the process.  These industries include precision agriculture, film making, power line and pipe line inspection, and oil and gas flare stack inspection.

Last month, the aviation administration released new policies in its “Interpretation of the Special Rule for Model Aircraft.” The new policy on model aircraft and unmanned aerial vehicles stated that individuals can freely view crops “for personal enjoyment,” but cannot use the devices to determine “whether crops need to be watered.” 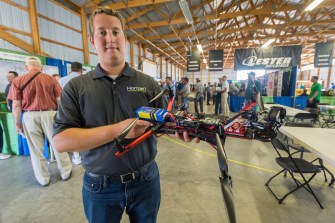 “No one’s here to try to break any rules or laws, or break the FAA’s regulations,” said Steven Petrotto, brand manager for Horizon Precision Systems, an offshoot of Horizon Hobby LLC that is based in Champaign, Ill. “But, the industry is strong and we’re definitely lobbying to get these sorts of systems out there.”

“The FAA has been relatively clear, but, at the same time, unclear for what we have to do to become skillfully certified,” he added.

Morris said he once viewed the agriculture industry as a promising market. Now, he said the restrictive policies have led him to focus on other markets.

“I’ve always wanted to be able to work commercially in this market,” said Morris, who now sells his aircraft to government buyers and in markets abroad. “We’re just looking forward to a future where we can do that in the U.S.”

During the show, Morris showcased his company’s Super Bat UAV. At a cost of $150,000, this high-end drone model that can fly thousands of feet in the air and survey up to 55,000 acres in a single day.

“We see agriculture as a big potential market,” Morris said. “Unfortunately, we think it’s going to be other countries that develop this first because of severe regulations in the United States. 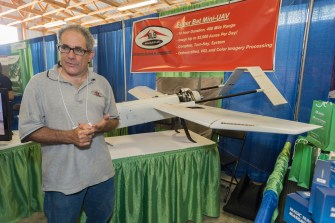 Stephen Morris, president of MLB Company, stands next to the Super Bat UAS at the 2014 Precision Aerial Ag Show in Decatur, Ill. The Super Bat UAS can reach altitudes of 10,000 feet and survey 55,000 acres of crops in one day.

Besides concerns with commercial use and privacy, critics have also pointed out that increased drone use presents safety challenges.

For instance, the Department of Transportation audit stated that the aviation administration is “significantly behind” schedule in meeting provisions of the FAA Modernization and Reform Act of 2012, including goals related to achieving safe integration.

“You can do a lot of damage really fast, whether that’s to property, yourself or someone else,” Aberle said. 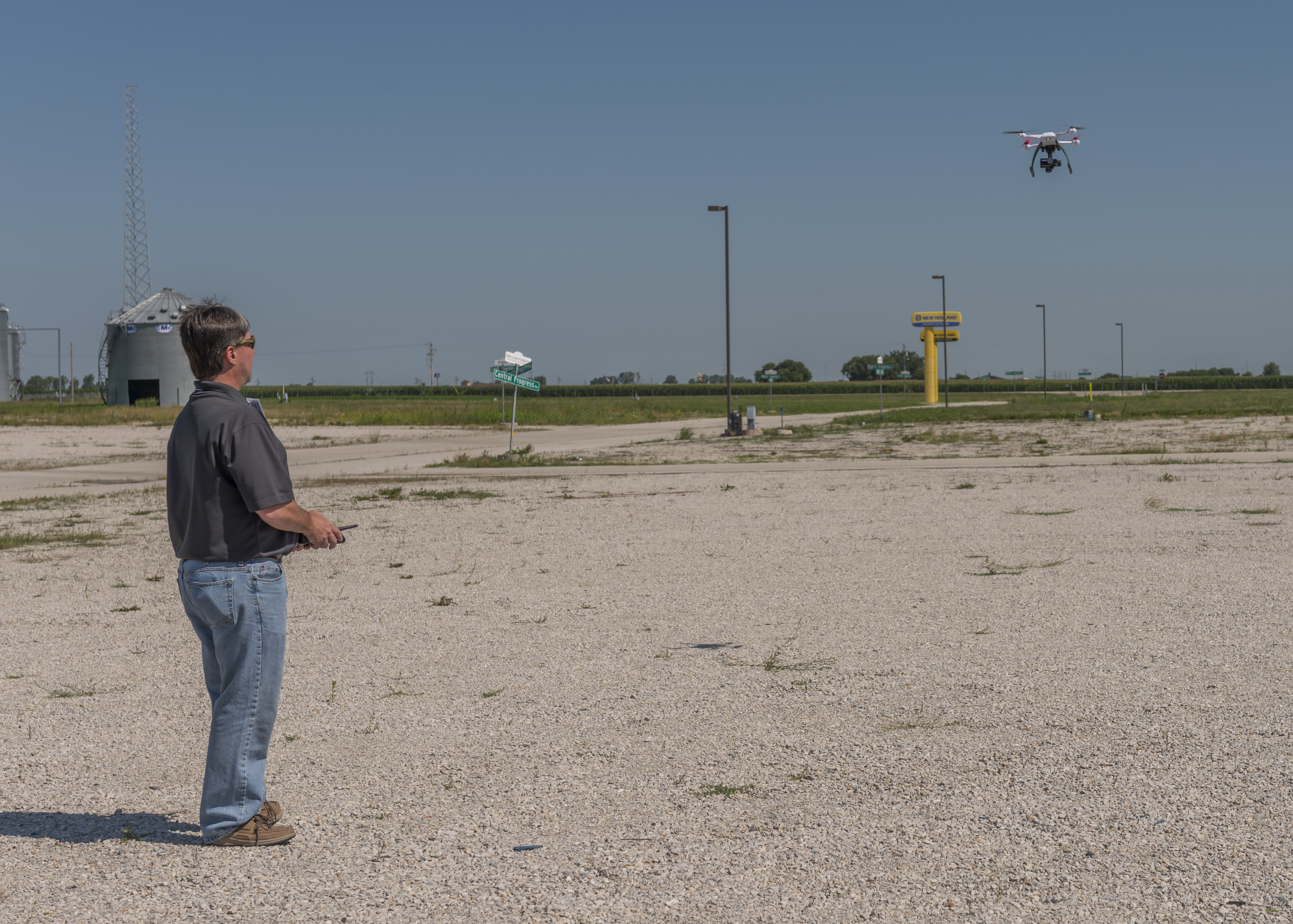 A hobbyist-level vehicle from Horizon Precision is flown at the Precision Aerial Ag Show in Decatur, Ill. Under current federal policy, hobbyists can fly drones at altitudes below 400 feet. 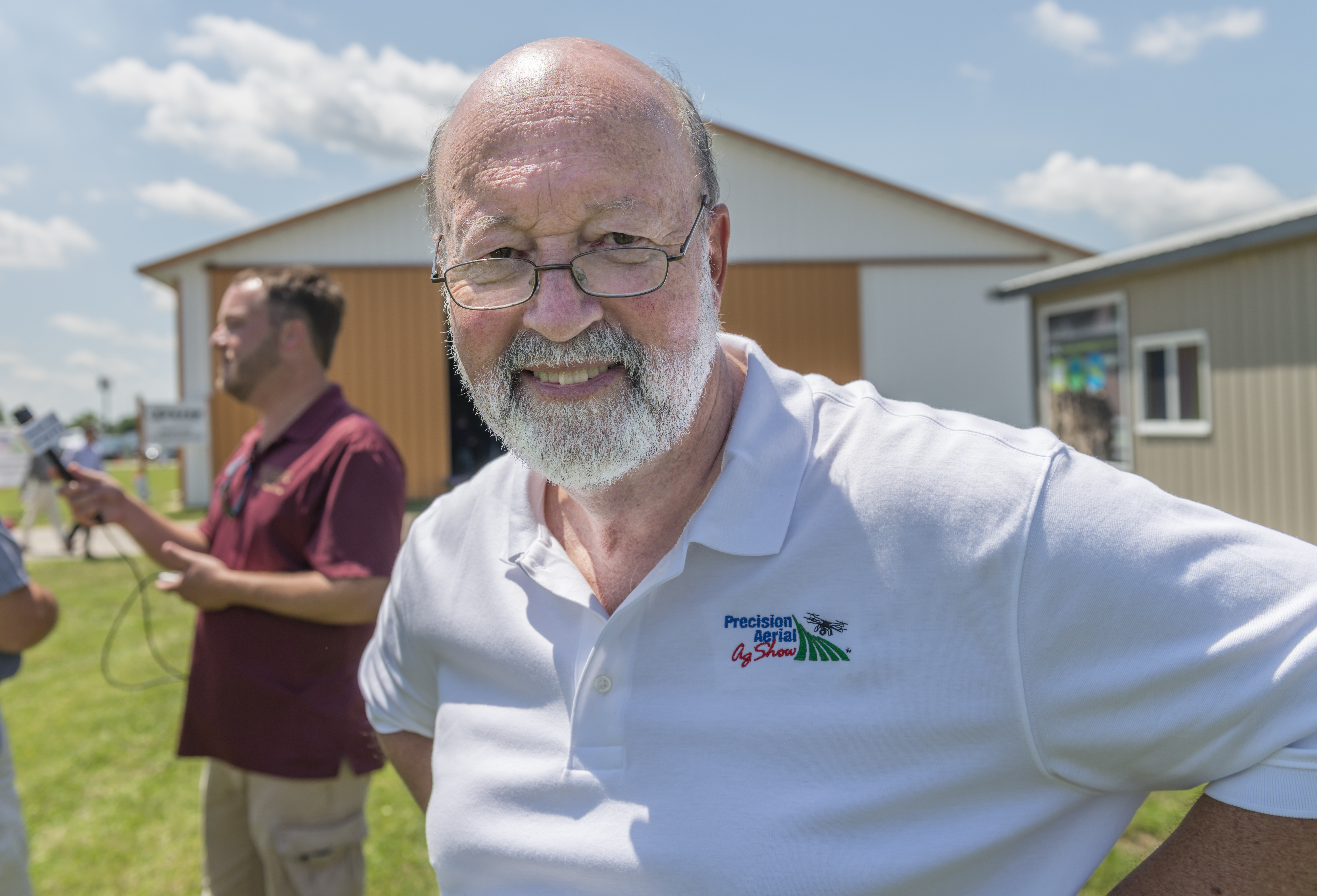 Stu Ellis helped organize the 2014 Precision Aerial Ag Show. “The turnout today shows a great interest of farmers trying to advance the technology on their farms to make it more efficient,” Ellis said on the show's kickoff day. 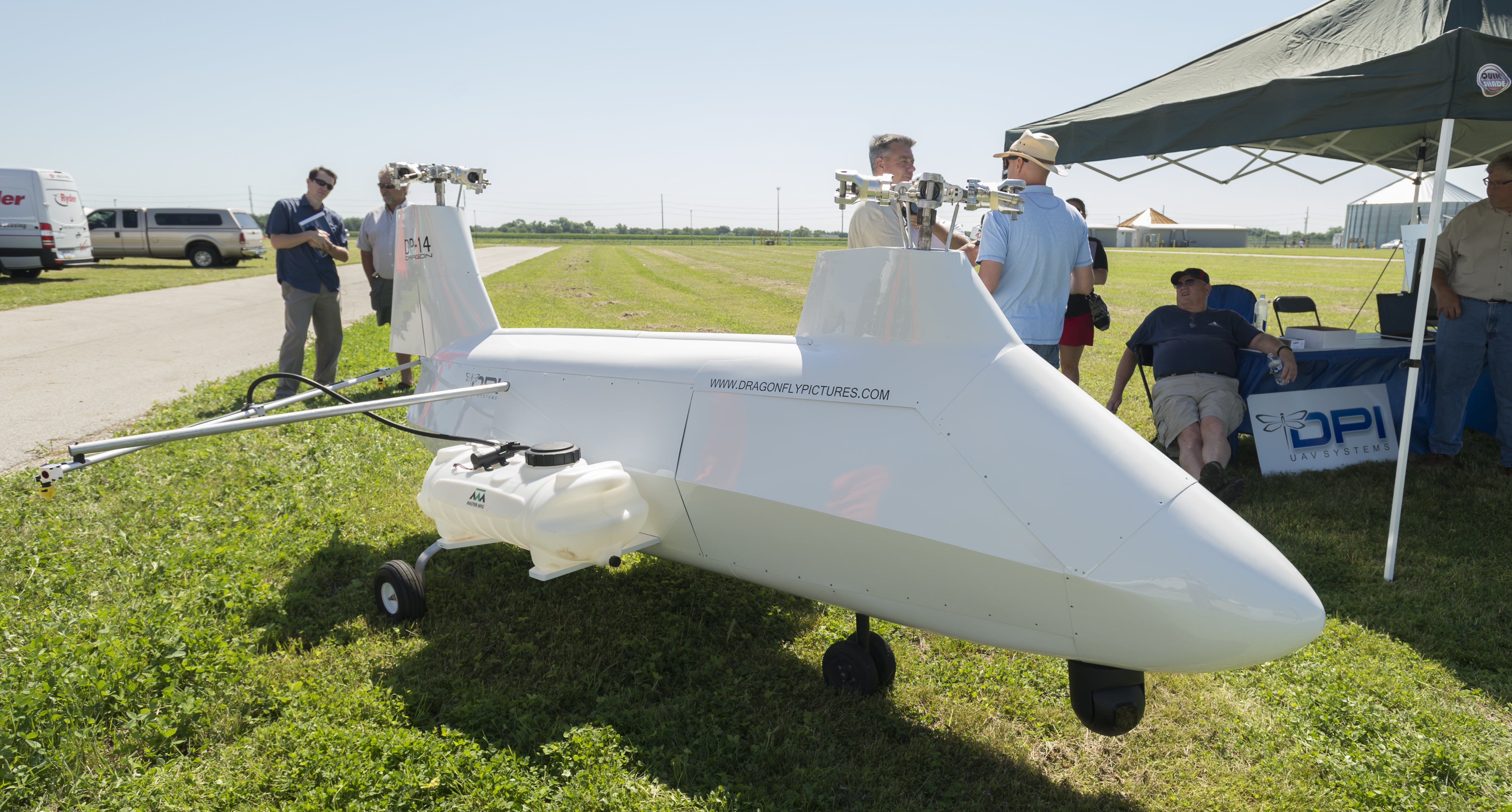 The large Dragonfly Pictures unmanned aerial vehicle allows for a spray attachment. The Dragonfly was one of the largest drones at the 2014 Precision Aerial Ag Show. 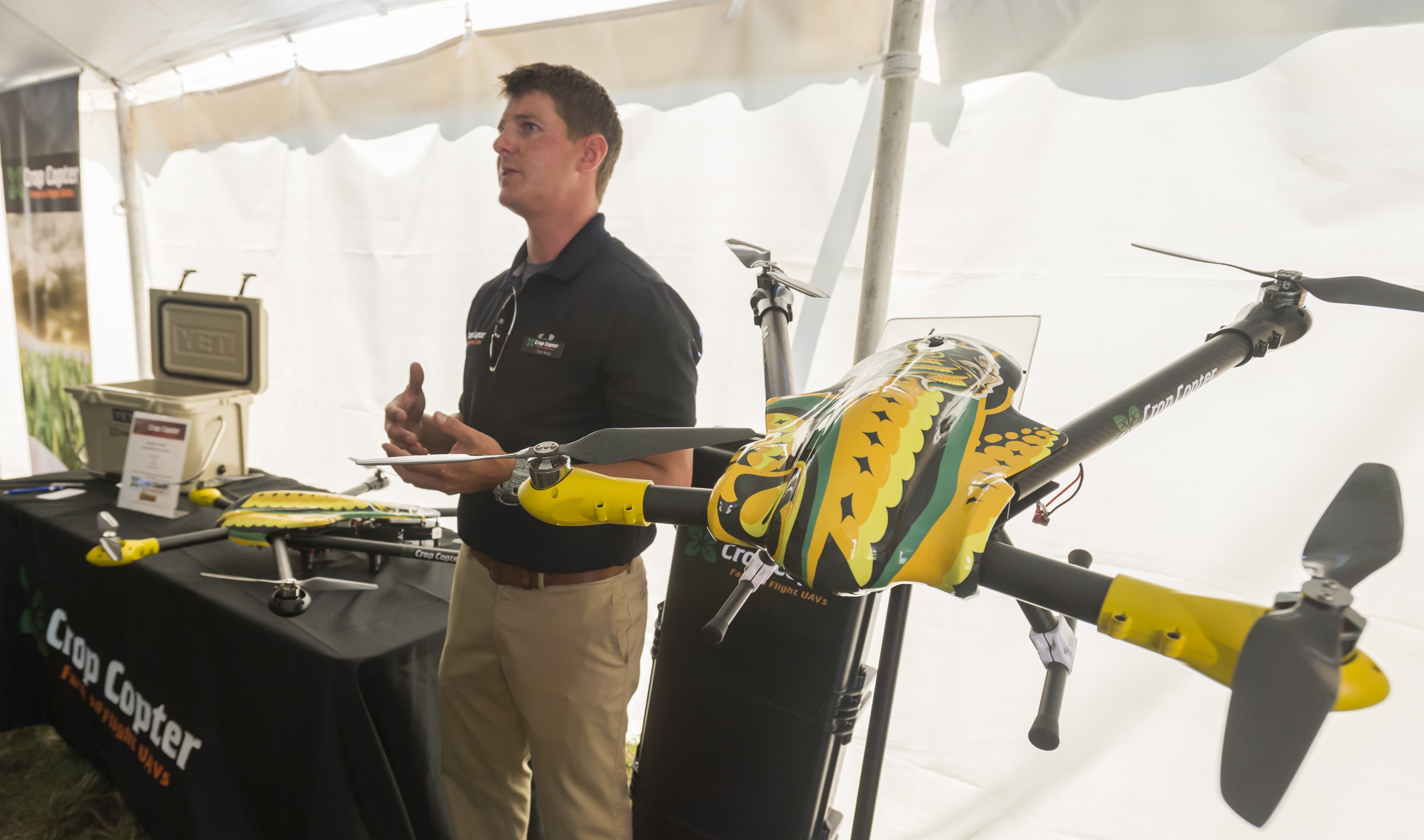 Tom King of Crop Copter talks about the company's vehicle selections at the 2014 Precision Aerial Ag Show. A hobbyist-grade drone can cost less than $300 in some cases. High-end drones, in contrast, can cost more than $100,000. 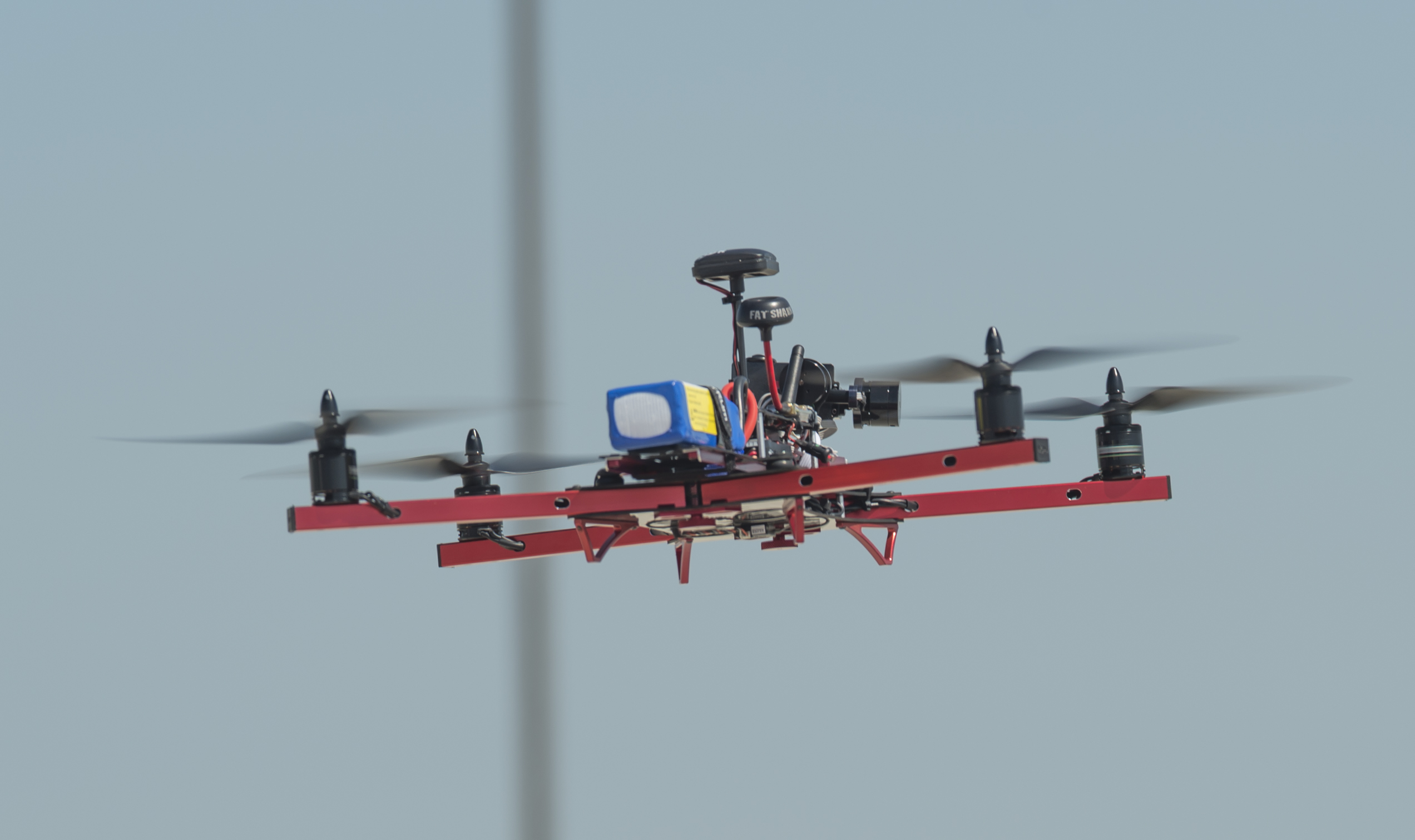 In June, the Federal Aviation Administration released new policies on model aircraft and unmanned aerial vehicles. The policies stated that individuals can freely view crops “for personal enjoyment,” but cannot use the devices to determine “whether crops need to be watered.”