More than 300 researchers from around the world gathered at the University of Illinois this week for a major conference on how to feed a global population that is expected to rise to 9 billion people by 2050.

Organized by The Institute for Sustainability, Energy and Environment at the University, the conference kicked off at the Alice Campbell Alumni Center with a welcome speech by New York Times reporter Andrew Revkin. The conference was held Tuesday through Thursday at the University of Illinois at Urbana-Champaign.

The problem of feeding the world is bigger than just providing enough food, Revkin said.

It also includes issues such as waste, ethics and diversity in the food system.

“Remember, food isn’t just about growing more food,” he said. “It’s about fewer mouths, mouths that get adequate nutrition but not too much—It’s all that interface.”

Over consumption can be a problem too, Revkin said.

Researchers refer to the idea of feeding the maximum population as “peak food,” analyzing the concept using the 2050 benchmark.

“Peak food is kind of a question mark after that,” said Revkin, who writes in the New York Times’ Dot Earth blog. “Obviously, it really is a question – it’s how do we limit harm to the environment and ourselves.”

Revkin also said that “diseases of affluence roughly take away as many life years as diseases of poverty.” 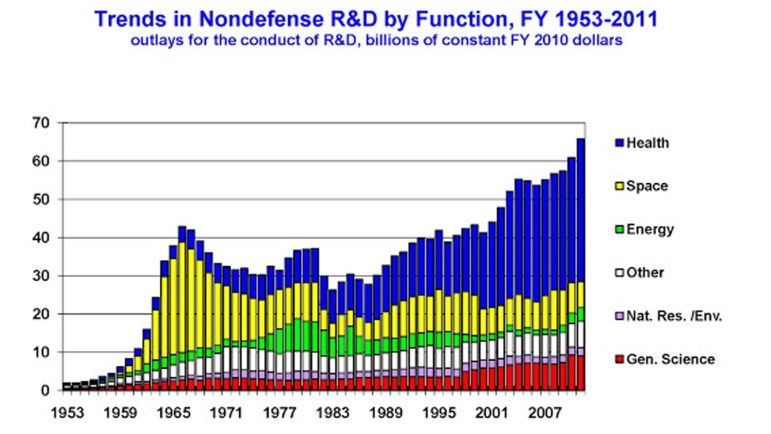 Government spending on research has varied throughout the past 50 years. Overall, however, 2011 spending data show that it has climbed to between $60 to $70 billion. Most of that total is allocated to health research. The second-largest portion of government funds is directed toward space research. Energy, natural resource and general science research trails in comparison. Guest speaker Andrew Revkin said funding specifically devoted to agricultural research is an ‘indiscernible” portion of the general science category.
Chart data compiled by the Office of Science and Technology Policy.

Funding research is also a challenge

While health research funds have reached roughly $70 billion, funding for other research to solve these problems has not kept up.

Research and development interests in energy have not increased much since the 1970s, hovering between $10 billion to $15 billion, according to data from the Office of Science and Technology Policy.

And funding specifically for agriculture research is considerably less.

“To get something big and revolutionary done takes tens of millions of dollars for a number of years,” Revkin said. “Agriculture… we’re just not there yet in terms of making this a priority.”

For a roundup of coverage from the Institute for Sustainability, Energy and Environment’s 2014 iSEE Congress, follow @IMidwest on Twitter. Browse through a list of conference tweets below.