And, as world’s population continues to soar toward 9 billion people within the next four decades, the agriculture industry may have to produce between 70 and 100 percent more food than it currently does, said Stephen Long, a professor of plant biology and crop sciences at the University of Illinois at Urbana-Champaign.

Read also: "Feeding the world proves to be a growing challenge"

Currently, the world's population is about 7.2 billion people.

“If we stay on this projection, food prices are going to get higher and higher,” Long said.

Long was among the several researchers from around the world who traveled to the heart of the Corn Belt this week for a three-day conference at the University of Illinois' Alice Campbell Alumni Center. The conference focused on the growing demand for food and sustainable agriculture.

Part of what the researchers had to say suggests bad news for consumers. 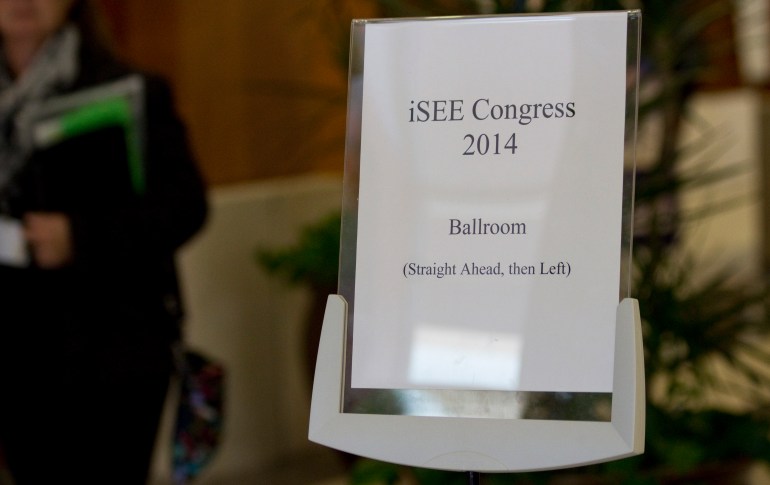 The iSEE Congress 2014 conference on sustainability took place at the Alice Campbell Alumni Center at the University of Illinois at Urbana-Champaign. Conference events were scheduled for Sept. 30 through Oct. 2.

The University of Illinois at Urbana-Champaign’s Institute for Sustainability, Energy and Environment organized the conference, titled “Feeding 9 Billion: A Path to Sustainable Agriculture.” The conference’s first full day of sessions on Wednesday largely focused on the daunting challenges that climate change brings to agriculture. The conference began Tuesday night with a keynote address presented by New York Times columnist Andrew Revkin. It will conclude Thursday night. Conference events were held at the Alice Campbell Alumni Center.
Other topics brought up on Wednesday included the economic impacts of climate change on agriculture, the constraints of future agriculture irrigation and the production of biofuel. Thursday’s sessions focus predominately on food security.
The Institute for Sustainability, Energy and Environment’s mission is to foster “actionable, interdisciplinary research to address fundamental challenges” in those subject areas.

“We are facing tremendous threats globally,” said Peter Schiffer, vice chancellor for research at the University, during the day’s opening remarks.

Among those threats to agriculture are rising temperatures, extreme weather and uncertain precipitation levels, according to a White House assessment released in May.

“If we stay on this projection, food prices are going to get higher and higher.” - Stephen Long

Also among the threats are more resilient diseases, weeds and other pests.

“Globally, we’re not managing to increase the yield of our primary food stuffs at a fast enough pace to keep up with increasing demand,” Long said.

Data from the U.S. Department of Agriculture’s National Agricultural Statistics Service show that farmers throughout the United States grew about 14 billion bushels of corn last year.

This year, farmers in Illinois alone are expected to grow about 2 billion bushels of corn.

Agricultural innovation has allowed farmers and producers to support a growing population for thousands of years. In this recent portion of human history however, that innovation has hit a roadblock when it comes to genetically modified organisms,commonly known as GMOs.

To date, at least 60 bills related to GMO labeling have been introduced in more than 20 states.

Since their introduction, neither bill has made much progress.

In May, Vermont became the first state to require GMO labeling. 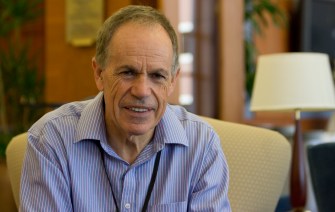 Stephen Long is a Gutgsell endowed professor at the University of Illinois at Urbana-Champaign. On Oct. 1, 2014, he spoke about the challenges of increasing crop yields to feed nine billion people by 2050.

While thousands of scientific studies have reached varying and contradictory conclusions on the health impact of GMOs, Long said much of the opposition to GMOs is a “miscommunication” and a result of “disinformation.”

He said the use of genetic engineering is safer and more controlled than natural crossbreeding. Its acceptance, he said, could prove the difference in the struggle of feeding 9 billion people.

“We know that we can’t get these gains from traditional plant breeding,” Long said.

“I think, really, scientists failed to explain what plant transformation actually means, what engineering actually means, versus the way which we’ve been traditionally been improving plants,” he added . “It’s ended up with groups that are opposed to this, having the upper hand and terming these Franken-foods and so on.”