The long delay in proposed renewable fuel minimums by the Environmental Protection Agency has likely stalled the production of advanced biofuels – or cellulosic ethanol formulas such as those made from tall grasses and stalks.

The Renewable Fuel Standard currently mandates that 6 million gallons of fuel need to come from cellulosic, or plant-based materials, like miscanthus.

Still, the proposed standards are only a fraction of what was originally required.

The delay caused uncertainty among advanced biofuel producers and prompted criticism of the federal standard.

Just ask Doug Berven, vice president of corporate affairs for POET, one of the largest ethanol producers in the world.

“Higher blends of ethanol bring in a lot of politics because the oil industry is extremely powerful, and from a consumer perception standpoint, they do not want to lose market share,” Berven said.

POET has 27 ethanol plants in the Midwest. Only one of those plants is a cellulosic ethanol plant, and it also powers grain-based plants with its waste.

Berven said he hopes this model is something other companies will adapt.

But, he said his company does not have plans to build any more cellulosic facilities under the EPA’s current cellulosic ethanol mandates.

“Farmers don’t know how long the cellulosic ethanol is going to be there if the government is not willing to stand by the renewable fuel standard,” Berven said. “And they’ve been wavering on it as of late.”

At least one Illinois farmer knows all about this.

Eric Rund, a farmer in Pesotum, Ill., farms about 650 acres of corn and soybeans.

Seven years ago, Rund and his wife started researching a grass that is used in biofuel production called miscanthus. Now, he has 25 acres of it.

“I can pretty much grow corn in my sleep, I’ve been doing it long enough,” Rund said. “But miscanthus is a new crop, you have to learn how to plant it, how to harvest it, what’s the best market or markets, so it’s quite exciting to be involved in that.”

Eric Rund watches the picker as the family farmer harvests miscanthus on March 6, 2015.

Cuttings pour from a chute as the picker transfers harvested miscanthus to a wagon on March 6, 2015. 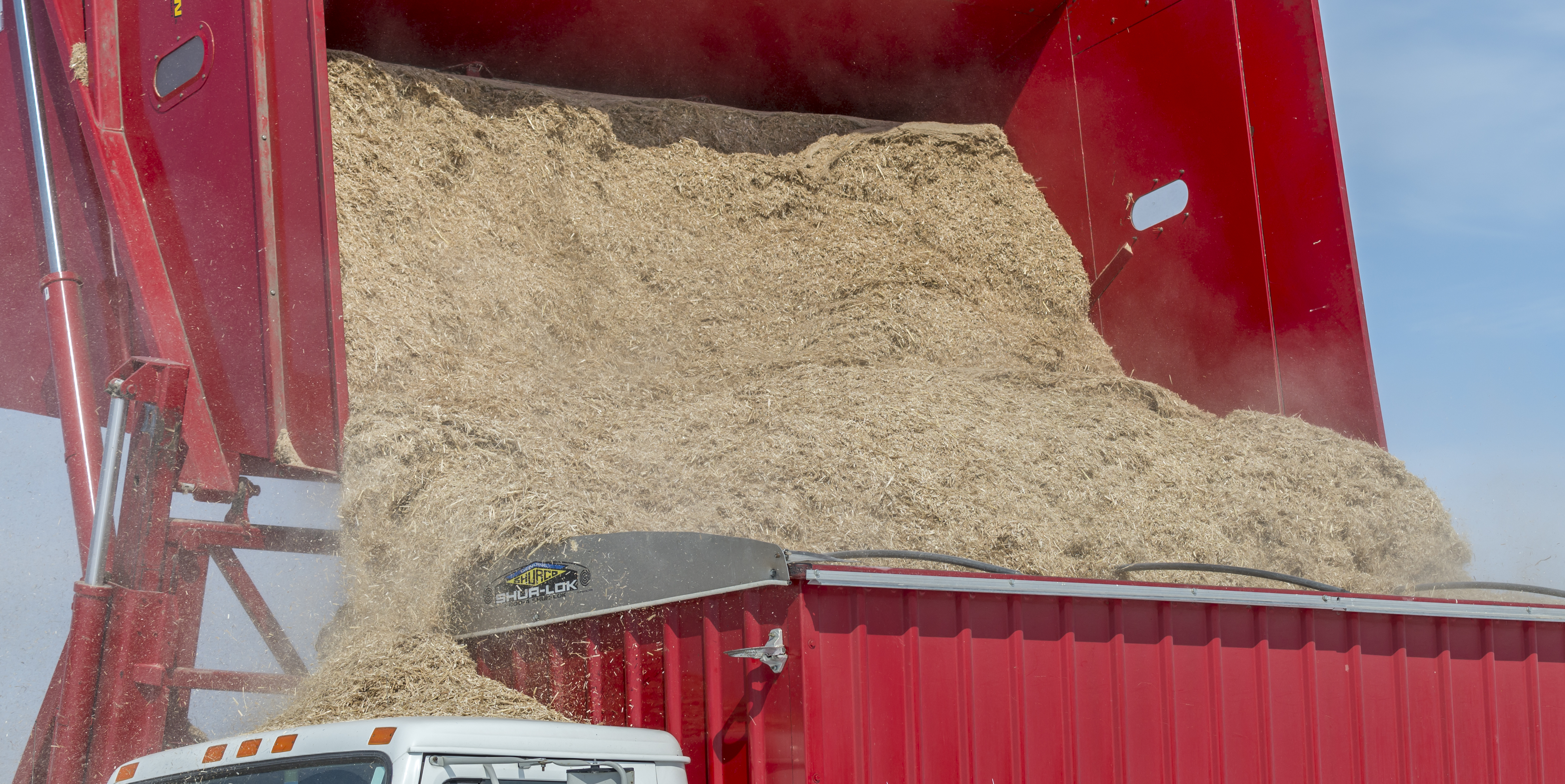 A central Illinois farmer dumps miscanthus cuttings into a trailer on March 6, 2015. Miscanthus is used as an advanced biofuel.

Unlike corn, miscanthus is a perennial crop that takes about three years to establish. After that, it can be harvested annually and does not need to be replanted.

Refiners can also yield more than double the amount of ethanol from an acre of miscanthus compared to an acre of corn, according to research at the University of Illinois at Urbana-Champaign.

“Some of these advanced biofuels are able to reduce carbon emissions by 100 percent compared to gasoline,” said Madhu Khanna, a University of Illinois economics professor. 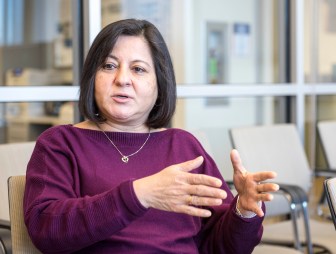 University of Illinois at Urbana-Champaign professor Madu Khanna on Feb. 2, 2015. Khanna is a distinguished professor in environmental economics in the Department of Agricultural and Consumer Economics.

“The benefit to the environment increases, but as far as the consumer is concerned, they wouldn’t notice any difference,” Khanna said.

But biofuel industry leaders are concerned that, because biofuel crops like tall grass are unfamiliar to the majority of farmers, they will be reluctant to plant new crops despite the benefits.

Miscanthus takes up less land than corn and does not have to be grown on cropland to thrive. In fact, University of Illinois crop science professor Stephen Long said in a press release that he would rather see it grown on non-cropland.

Doing so improves poor soil quality with its rapid-growing root system, which stores nutrients and then drains them out. 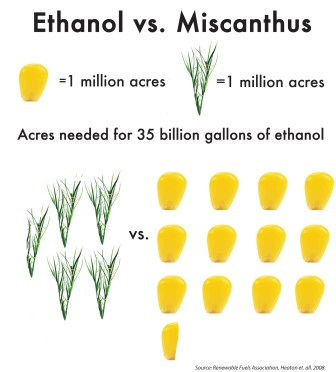 Shown here, miscanthus can yield much more in terms of renewable fuel per acre than corn. Click on the image to enlarge it.

“It’s difficult to make cellulosic ethanol because you have to change the way farmers think and do business and grow things,” Rund said. “It’s easy for corn ethanol because you’ve just got to keep growing corn – there was no change for farmers.”

Still, Rund said the profit per acre of miscanthus is considerably more than corn this year.

He no longer plants the crop because of its limited market, but turns what he does harvest into bedding for turkey producers. And although turkey bedding is the most lucrative market for him right now, he hopes miscanthus will one day replace the world’s dirtier fuels such as coal.

“Many people are realizing that it just costs too much money to make fuel,” Rund said. “If you burn [miscanthus], you get 85 percent of the energy out of it. Plus, it’s the simplest thing in the world, to just light a match to it and burn it.”

Rund wants farmers in rural areas to be able to burn biomass crops to power their farms.

He has a grant application out to the Department of Energy to allow him to import and sell biomass boilers from a German company called Heizomat.

“I don’t want to be a furnace man in my lifetime, but I’ll stick with it long enough to get them here, because we need something like that,” he said. “Otherwise, biomass as it is now is not going to go very far.”

The U.S. consumed about 134 billion gallons of gasoline in 2013 alone, according to the Energy Information Administration.

Although the future is unclear for cellulosic ethanol, Berven said he hopes it will eventually help offset U.S. gasoline production.

“Going forward, I think we can create a much better solution for providing food, fuel, and feed, and we can do it all through agriculture,” he said.