“Regardless of what you think personally about [corn] ethanol, from a market standpoint, it has found its feet and it is now a well-acknowledged, cheap source of octane in gasoline blends,” said Scott Irwin, agricultural marketing professor at the University of Illinois at Urbana-Champaign.

The Environmental Protection Agency proposed to reduce renewable fuel mandates for 2014 through 2016, lessening what it initially slated in 2005.

The EPA’s Renewable Fuel Standard requires oil refineries to produce specific amounts of ethanol made from corn and plant matter annually and blend it with gasoline. The standard was meant to keep gas prices low for consumers and decrease U.S. dependency on foreign oil.

The goal of the Renewable Fuel Standard is to produce a total of 36 billion gallons of renewable fuel by 2022.

Though the proposal increases the amount of renewable fuel overall, it still slashes more than 11 billion gallons from original federal goals.

But Irwin said, regardless, corn ethanol won’t be as affected like other renewable fuels.

“If we took the [Renewable Fuel Standard] away tomorrow… in theory, we would use close to if not exactly the same amount of ethanol as we do today,” he said.

Irwin said that’s because the standard helped with the heavy costs of building ethanol plants, and now all producers need to do is maintain production – a task that shouldn’t be difficult because of the steady demand for corn ethanol.

Additionally, leftovers from the ethanol production process are turned into animal feed and sold for further financial gains.

For every gallon of gasoline blended in the United States, up to 10 percent comes from ethanol – the majority of which is produced from corn.

Under current regulations, Irwin said the ethanol mandates might save consumers a few pennies per gallon of gasoline. | Story continued below

The map below shows how much ethanol each state produced and had the capacity to produce in 2014. Use the tabs at the top left-hand corner to zoom in or out. | Source: U.S. Energy Information Administration

The comment period closed on July 27 and the EPA plans to finalize its proposal in November. 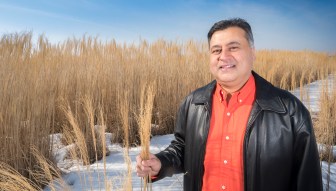 The delay sparked more than 66,000 comments, including those who felt the EPA should increase ethanol standards.

“Those reactions are being intensified by the current margin squeeze on corn farmers in the United States,” Irwin said. “They’re losing money right now. The price of corn is below the cost of production.”

Jay Kesan, a law professor from the University of Illinois who specializes in renewable energy policy, said the industry would be better served by lasting mandates that do not change every year.

“Constantly changing the mandates every year as the EPA has been doing has resulted in a lot of uncertainty,” Kesan said. “And uncertainty is very bad for people who are making investments.”

Kesan was part of a group of experts who produced a Bipartisan Policy Center report called “Options for Reforming the Renewable Fuel Standard” in December.

The report suggests the EPA should curb mandates for corn ethanol at 15 billion gallons in 2015 and gradually increase cellulosic, biodiesel and other advanced biofuel requirements.

Officials from one of the world’s largest corporate agribusinesses in the world supported Kesan’s assessment.

“There’s certainly potential in advanced biofuels,” said Jackie Anderson, spokesperson for Chicago-based Archer Daniels Midland. “But the success of advanced biofuels is being limited by a lack of regulatory uncertainty.”

The company has six ethanol plants, and Senate lobbying disclosure records show it is active in lobbying on renewable fuel standard legislation.

Records show that other top agribusiness companies, including Monsanto, lobby on the legislation, as well.

“We invest [in biofuels] to help farmers have a better harvest,” Monsanto corporate engagement representative Charla Lord said. “[Cellulosic biomass products] could be key enablers for future feedstock choices if growers believe there is an available market.”