In the United States, GMOs and other types of biotechnology are controlled under what is known as the coordinated framework for biotechnology, a tag-team regulatory system split between the U.S. Department of Agriculture, the Food and Drug Administration and the Environmental Protection Agency.

That system is currently in the middle of processing a new variety of higher yielding corn produced by Monsanto.

“That’s going as we would expect,” said Joe Walsh, who works as the North American corn technology lead officer for Monsanto.

But as government officials review the St. Louis-based seed company’s corn, critics – including the White House – have recently called for that system to be overhauled.

In a memorandum dated July 2, executive branch officials advised that, though the coordinated framework is working, it needs to be modernized, as its most recent was decades ago. White House officials are seeking improvements to promote transparency, public trust and innovation.

“While the current system for biotechnology products effectively protects health and the environment, advances in science and technology since 1992 have been altering the product landscape,” the officials wrote.

“In addition, the complexity of the array of regulations and guidance documents developed by the three Federal agencies with jurisdiction over biotechnology products can make it difficult for the public to understand how the safety of biotechnology products is evaluated, and navigating the regulatory process for these products can be unduly challenging, especially for small companies,” they continued.

The White House also called for redefined roles for the USDA, EPA and FDA, while highlighting the need for an external commission to evaluate future biotech trends.

The EPA evaluates related-pesticide use and FDA looks into human safety.

The USDA gave its preliminary thumbs up to Monsanto’s higher yielding corn after the White House memorandum.

The USDA and FDA did not respond to requests for comment on this story.

“It is EPA policy to apply our authorities over biotechnology in an open and transparent manner,” said an EPA spokesperson in an email. “EPA, along with other agencies, is actively engaged to clarify the roles and responsibilities of the federal agencies that regulate biotechnology in light of developments in the field.”

Farmer Paul Jeschke on his farm near Mazon, Ill., on Aug. 20, 2015. The regulation of biotechnology and GMOs has remained an important issue, especially as seed companies continue to roll out new products. Today, nearly 90 percent of corn is grown with genetically engineered seeds.

GMO-creators must submit petitions any time they want to take a genetically engineered product to the market.

Petitions are often hundreds of pages long and include information that describes in detail exactly what their GMO does, how it was created, and how it is likely to affect farmers, the environment and the economy.

A Midwest Center for Investigative Reporting analysis found that the Animal and Plant Health Inspection Service has approved about three out of every four petitions ever received. 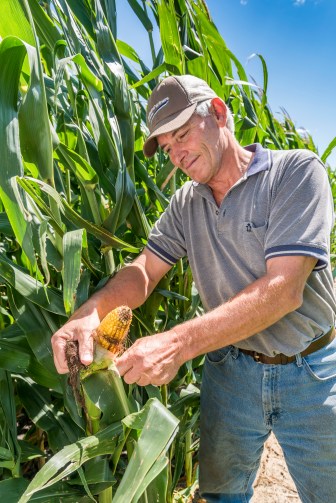 Farmer Paul Jeschke holds up an ear of corn at his farm near Mazon, Ill., on Aug. 20, 2015. Monsanto's higher yielding corn product would increase the size of an ear of corn by about 12 percent, the company claims.

When the petitions weren’t approved, they were not rejected or denied, but rather withdrawn by the companies or research institutions that submitted them.

That high approval rate has led some critics to argue that the federal government is far too lenient when it comes to regulating GMOs.

“The framework for the regulation of agricultural biotechnologies is not really a regulatory framework,” said Steve Suppan, a senior policy analyst with the Institute for Agriculture and Trade Policy, an advocacy group that often takes anti-GMO stances. “Rather, it’s a deregulatory framework.”

Among his other concerns, Suppan said the federal government is too trusting of groups that submit petitions, which he said are not independently verified for accuracy.

“You’re pretty much taking the applicant at its word,” he said.

The federal agencies in charge of biotechnology take public comments into consideration before making a final decision. Monsanto’s higher yielding corn netted two dozen public comments during a window that closed on Aug. 20.

The vast majority of the comments were from individuals against the deregulation of the GMO corn.

Suppan said he has no doubts that Monsanto’s higher yielding corn will soon be approved.

“It’s a very, very weak – well, I would call it a non-existent – regulatory system,” he said.