Monsanto filed a petition with the U.S. Department of Agriculture in September 2014 to deregulate the seed company’s groundbreaking genetically engineered corn that allegedly produces bigger ears.

“Do your job and don’t approve this or other products until they can be shown safe,” said commenter Doug Lande.

Others skeptics call for legislation that would require companies to label GMOs. There currently is no nationwide standard, and only a handful of states have state-level requirements. According to one 2014 poll conducted by Consumer Reports’ National Research Center, 92 percent of Americans support GMO labeling. Another 2013 poll conducted by the New York Times placed that figure at 93 percent.

The rallies against Monsanto’s higher yielding corn and GMOs have proven somewhat unsuccessful.

And as for national GMO labeling, an overarching piece of federal legislation known as the Safe and Accurate Food Labeling Act of 2015 recently made it out of the U.S. House of Representatives and onto the Senate. If voted into law, the act would eliminate state-level GMO labeling laws and create a universal voluntary standard.

Despite widespread opposition, GMO-supporters argue that genetic engineering holds the key to feeding a world population that some estimates project will skyrocket to nearly 10 billion people within the next four decades.

“Ultimately, our goal is to feed those people,” said Illinois corn and soybean farmer Paul Jeschke. “We’ll continue to research these new and improved methods of increasing our food production.”

Additionally, geneticists point out that humans have been working to improve nature – especially corn – for thousands of years.

“Corn is really quite extraordinary, as it’s a human-created species,” said Patrick Schnable, a maize geneticist who has studied the corn genome for the past 35 years. “We created it, and it cannot exist without us.”

Corn, genetic engineering throughout the years

Before corn was corn, it was likely a wild grass called teosinte.

Thousands of years ago, people living in what is now Central America and Mexico began selecting seeds from teosinte plants that appeared to have more favorable traits and planting those instead of random ones. Over many generations of selectively perpetuating desired traits, the plants began to change and produce more grain.

“Through processes that are still quite fascinating to us, they were able to convert a wild plant called teosinte,” said Schnable, who teaches at Iowa State University and holds the Iowa Corn Endowed Chair in Genetics title. “Through this domestication process, they created a new species and what has become a very important crop.”

Originally, ears of corn were closer to the width and length of a human thumb, nowhere near the size of their modern cousins consumers now buy at the grocery store. 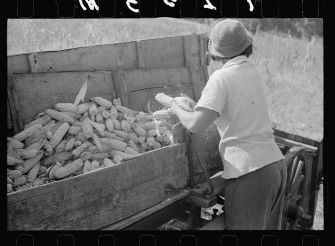 During the domestication process, humans began controlling how the plant spreads its seeds, eventually creating varieties that lacked a natural way of scattering seeds entirely. In nature, plants typically have a way to multiply on their own. Dandelions, for example, spread by blowing seeds into the wind.

“There’s some [plants] that have little burs on them, so when you walk through the woods or your dog does, the seeds cling to fur or clothes and carry the seeds around,” said Schnable, whose research is partially supported by Iowa farmers. “Corn doesn’t have that.”

Unable to spread its seeds, corn would go extinct in only a few generations if humans were not around, Schnable said.

Scientific breeding was first applied to corn in the 1930s with the work of George Wells Beadle and others. Instead of hoping for the best in trial and error, agricultural scientists began scientifically evaluating how different strains affected each other when crossed.

As a result, the size of corn has increased six-fold since 1939.

Today, ears can be a foot long with the girth of a baseball bat.

“There’s absolutely no question that yield is king,” Schnable said. “That’s where growers make their money.”

Monsanto and modern seed companies can create hybrids through conventional breeding techniques by blending two different types of corn together. With advances in genetic technology and a better understanding of DNA, they can also introduce genes from completely different species.

This kind of genetic engineering concerns most anti-GMO critics, who argue that modified products could be unsafe to consume. Although the results of safety studies have been mixed, many have determined genetically engineered foods are safe to eat. 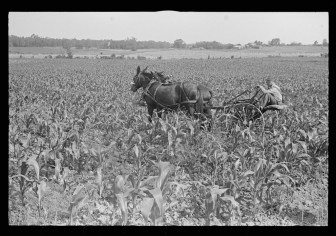 The engineering itself is carried out in several different ways, according to Schnable. One method is called biolistics, a process during which scientists attach desirable DNA to very small particles and use a shotgun-like device to shoot them into the cells of a corn plan.

Another method mixes plant genes with petri dishes full of agrobacterium, a special clear material that excels at transferring DNA from one organism to another.

“As part of [agrobacterium’s] lifecycle, it introduces DNA into host cells, and this organism has been adapted to help us with the genetic modification of corn and other crops,” Schnable said. “We use it much like we use a camel to carry things across the desert.”

Up to this point, Schnable said most genetically engineered products have been defensive, working to protect plants from insects, weeds and weather. These types of GMOs include Monsanto’s RoundUp Ready crops, rootworm-resistant corn and nematode-resistant soybeans.

Monsanto claims its higher yielding corn would be a first to boost corn yields.

Schnable said producing a higher yielding variety of corn has been challenging because yield is determined by numerous genes and each can have a relatively small effect.

“If there was a single, really important yield gene in maize, breeders would have already capitalized on that,” he said.

“Corn is really quite extraordinary, as it’s a human-created species... We created it, and it cannot exist without us.” - Patrick Schnable

The United Nations’ program on food reports that there are about 795 million people globally who are malnourished.

The international organization’s Department of Economic and Social Affairs also predicts that the world’s current population of 7.3 billion people will swell to nearly 10 billion by 2050. Feeding that population will require the agriculture industry and farmers everywhere to grow drastically more food, likely on less farmable land with fewer resources.

“That’s another two Chinas or two Indias,” said Roger Thurow, a long-time Wall Street Journal reporter who now works for the Chicago Council on Global Affairs, a non-partisan advocacy group that works to educate the public on important worldwide issues. “That places greater demand and stress on the global food chain.”

That problem is commonly known as the 2050 challenge.

It’s an issue Monsanto often reminds its critics about. 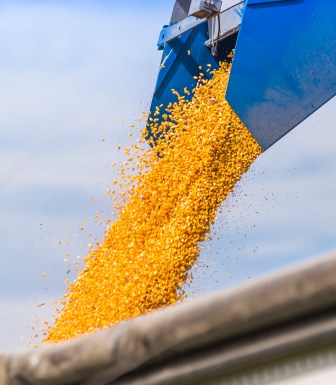 Corn grain is poured into a wagon in Champaign County on Sept. 27, 2014. According to the United Nations, global food production must double by 2050.

To complicate the challenge further, future populations will likely be wealthier and more middle-class. With prosperity comes increased demand for food, especially meat and other proteins, said Thurow.

“I look at it as not only feeding the world, but also nourishing the world,” said Thurow, who has written multiple books on global hunger, including Enough: Why the World’s Poorest Starve in an Age of Plenty. “Farmers on the ground have to become very innovative.”

In industrialized countries, corn is used primarily for animal feed and as raw material for processed products, such as high fructose corn syrup, oils, starches, glucose, dextrose and ethanol.

In developing countries, corn is still a dietary staple.

“Corn is just the prime crop in so many parts of the world,” Thurow said.

“You name the social problem, and they’ll say GMOs are going to solve it,” she said.

In his experience raising awareness for hunger and malnutrition, Thurow said GMOs’ potential likely falls somewhere in the middle.

“I don’t think it should be something that people say, ‘This is the only way to go,’ ” he said. “Nor should one say, ‘These types of technologies, forget them.’ ”