Finalized in May, the Water of the United States rule – commonly referred to as WOTUS – adds to the Clean Water Act by redefining which rivers, streams, lakes, wetlands and marshes federal officials have the power to control.

The rule has pitted environmental watchdogs against agriculture officials for more than a year now, as environmentalists say the rule is sorely needed while some farmers argue it is an overzealous land-grab.

“The judges expressed deep concerns over the basic legality of this rule,” said American Farm Bureau Federation President Bob Stallman in a statement. “This is the worst EPA order we have seen since the agency was established more than 40 years ago.”

“The court clearly understood our arguments,” he said.

The move to stay the rule came from the Cincinnati-based Sixth U.S. Circuit Court of Appeals on Friday through a 2-1 judges’ decision. The court order does not reverse the rule, but instead places a coast-to-coast stoppage on its enforcement until a final decision is later reached.

“A stay temporarily silences the whirlwind of confusion that springs from uncertainty about the requirement of the new rule and whether they will survive legal testing,” the court noted.

Only West Virginia and Kentucky have democratic governors.

“Under this illegal rule, Georgia families, farmers and businesses would be subject to excessive and intrusive federal regulation,” said Georgia Attorney General Sam Olens in a statement. 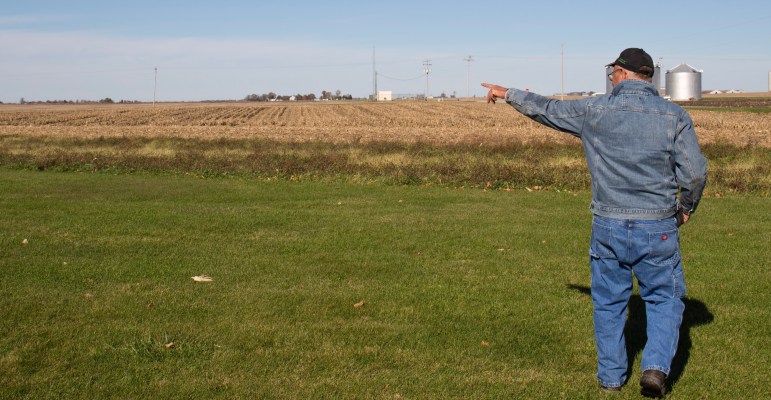 Lin Warfel walks across his central-Illinois corn and soybean farm on Nov. 5, 2014. Like many farmers, Warfel opposes the Waters of the U.S. rule.

“The more regulations I have to put up with, the less profit I have, the more complicated my production practices get.” - Lin Warfel, central Illinois corn and soybean farmer

The rule is a joint-effort between the U.S. Environmental Protection Agency and the Army Corps of Engineers.

According to the agencies, one the key provisions in the Waters of the United States rule is the protection it brings to the nation’s millions of acres of wetlands, which are scientifically proven to affect the water quality of connecting waterways.

Additionally, about one in every three Americans get their drinking water from streams vulnerable to pollution.

Farmers have been among the most vocal rule opponents because they believe it will cause them to secure special permits to pollute drainage ditches and seasonal streams on their farming operations that connect to larger waterways.

But the proposed rule does not change the special exemptions and exclusions farmers have received under the Clean Water Act throughout the past four decades, though, according to the EPA.

“Every major rule delivered by the EPA is guaranteed to face legal challenges,” said Jon Devine, senior attorney with the Natural Resources Defense Council, in a statement. “We look forward to making the case in court about the critical public interests at stake.”

Although the court issued an order of stay, it acknowledged that current water-regulation policy is murky and often confusing because of two different Supreme Court rulings from 2001 and 2006.

“In one sense, clarification that the new rule strives to achieve is long overdue,” the court noted.

After issuing the stay order, the Sixth Circuit Court will decide whether it has final jurisdiction or if the challenges need to be first considered at the district-court level.

“We are confident the courts will find that these are needed safeguards and reject claims that the rule protects too many water bodies from pollution,” Devin said.

For more on the recent WOTUS news, also read: