Little education or prior experience is needed to get a job in meat and poultry processing.

That could be why 28.7 percent of meat and poultry workers in 2015 were foreign-born non-citizens — more than three times the rate for manufacturing industries in general, according to a 2016 Government Accountability Office report. The work can be an attractive option for newcomers to the country.

According to a Northwest Arkansas Workers’ Justice Center report, 35 percent of workers in the meat and poultry processing industry nationwide are Hispanic or Latino. About 20 percent are African American, and about 8 percent are Asian.

Jacqueline Menjivar, 20, is the daughter of Guatemalan and Salvadoran immigrants. She said she works at Tyson’s Sedalia plant, her mother also works at Tyson, and that her father once worked there as well.

Menjivar said that although her mom has worked at Tyson for 20 years, she has never been promoted because she hasn't taken the time to learn English.

“They can't really have a manager that can't communicate with their workers,” Menjivar said, referring to her mom.

Immigrant rights advocate Elvira Satterwhite said that in the late 90s, an influx of Hispanic immigrants arrived in Sedalia. Satterwhite and her husband founded a Spanish-friendly church in 1999, “Amigos de Cristo Iglesia Luterana,” Spanish for “Friends of Christ Lutheran Church.” Previously, she worked for the Center for Human Services for 16 years, a non-profit agency in Sedalia, where she witnessed the need to address immigrant issues.

“The social work was just astounding,” Satterwhite said. “I started calling my friends and saying you have to help with this, this is bigger than me.” 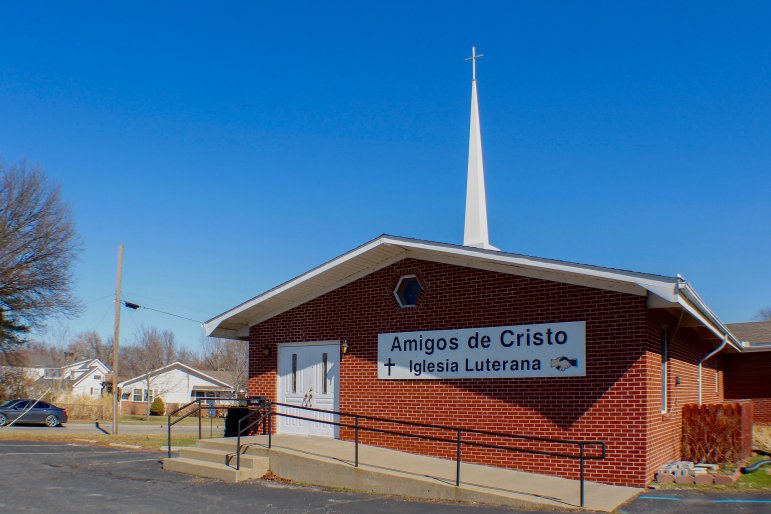 For years, Satterwhite spent nights with Spanish-speaking students in front of a dictionary, working through their homework. Sedalia schools didn’t offer English as a Second Language classes at the time, making it difficult for those students to understand their teachers.

“Some people are just so hard on them,” Satterwhite said, referring to the way some people treat immigrants. “They say, ‘why don’t you just get papers like everyone else?’ If they could get papers, there would be no ‘undocumented.’”

Even today, Satterwhite said, many people in town are without papers.

Satterwhite said fake papers can cost six or seven hundred dollars, and valid ones can cost as much as two or three thousand. But she said that as companies have become more strict, often even the good forgeries don’t work.

She mentioned a few incidents through the years, like when a brick was thrown through the church’s window or when slurs were spray painted on the church’s van, which highlighted some of the enduring anti-immigrant sentiment in town.

This sort of treatment isn’t necessarily limited to non-working hours.

“It’s not unreasonable to say that, at the margins, those populations will be less likely to avail themselves of whatever legal rights are available,” said Rafael Gely, a University of Missouri law professor who specializes in labor and employment law. “If your immigration status is questionable, you will not complain if your employer refuses to provide you whatever benefit you’re entitled to. You will be more concerned about being deported than whatever problem you are having.”

Lance Compa, senior lecturer at Cornell University’s School of Industrial and Labor Relations, was more blunt in his assessment.

“They become a fear-dominated labor force which is very easily exploited,” he said.

“We have a very diverse workforce and we embrace our diversity,” Derek Burleson, Public Relations Manager at Tyson, said. “We operate by a set of core values that call on us to be respectful to each other.”

Becoming a legal resident — an arduous and complicated process in and of itself— isn’t likely to be a silver bullet.

”It’s really frustrating because a lot of people just assume they’re undocumented because their skin is brown. That’s a problem. It continues to be a problem,” Satterwhite said.

“Even if you have no issue with your immigration status, there is a concern that they might not have access, because they might not speak the language, or might not know where to go for advice, or might not understand the processes that they need to follow, or might be working two or three jobs and not have ability to take time off to pursue a legal claim, in whatever form that might be,” Gely said.

This alienation can complicate many aspects of work, making things like speaking up about an injury or negotiating a salary challenging. In an industry many immigrants turn to to make a living, the consequences for workers are very real.

This story was produced by students in a Spring 2018 investigative reporting class at the University of Missouri School of Journalism taught by Sara Shipley Hiles.

Sara Shipley Hiles is an assistant professor at the University of Missouri Journalism School and a former reporter for the St. Louis Post-Dispatch, The (Louisville) Courier-Journal, and The Times-Picayune in New Orleans.

Huiqi Xu is a graduate student studying Computer-Assisted Reporting at the University of Missouri.

Maureen Strode is a junior studying Investigative Journalism at the University of Missouri.

Andrew Withers is a junior studying German and Data Journalism at the University of Missouri.