Meat and poultry processing workers often perform the same motions for hours at a time: pulling tenders off of chicken carcasses, tearing out their internal organs, or trimming cuts of meat.

These repetitive and forceful jobs, performed on long shifts with minimal breaks, can cause workers to develop musculoskeletal injuries,  including carpal tunnel syndrome, tendonitis, muscle strains and lower back injuries.

These injuries are common in poultry processing, but statistically, they are often invisible due to the way the Occupational Safety and Health Administration collects data. And this problem isn’t limited to just musculoskeletal injuries.

The Occupational Safety and Health Administration requires workplaces to report severe injuries to the agency within 24 hours. These severe injuries include amputations, loss of an eye and in-patient hospitalizations. OSHA does not require employers to report minor injuries that receive first aid treatment.

“If a team member gets hurt on the job, we request they report it, regardless of how minor they believe it to be,” said Derek Burleson, public relations manager with Tyson Foods, Inc., the largest poultry processor in the country.

“We do this because we believe in early intervention to reduce frequency and severity of injuries,” Burleson said. “We want workplace injuries and illnesses detected early so they can be immediately addressed.”

Employers are required to report only injuries and illnesses that force employees to take days off from work, so if a worker is placed on work restriction or is transferred to a different job, that injury doesn’t have to be reported to OSHA.

According to the 2016 GAO report, many workers who suffer from musculoskeletal disorders are transferred to a different job or are restricted from their job without getting days off.

There is also no specific way to record a musculoskeletal injury to Occupational Safety and Health Administration, because the OSHA logs — the forms employers are required to fill out when an injury occurs — do not have a section to report these types of injuries unless an employer states it on an incident report. OSHA logs are not consistently sent to OSHA or the Bureau of Labor Statistics — the agency responsible for collecting data on labor-related issues — so there is no specified way to compile data on this type of injury.

“If somebody stabs themselves or gets stabbed by a coworker on accident and has to go to the hospital, something that’s obvious and there are witnesses and everybody knows what happened, that will be reported,” Compa said. “But the typical repetitive stress injury doesn’t get reported anymore.” 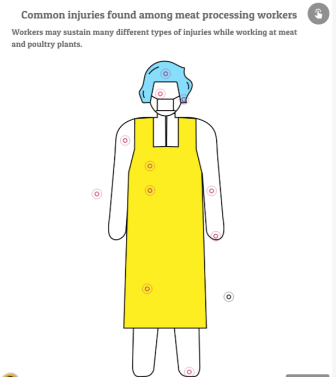 Moderately severe injuries — injuries that receive treatment by the plant’s medical staff and do not result in job transfer or restriction or time away from work — are not reported because they are not severe enough, according to Jessica Leibler, an environmental health professor at Boston University who has been conducting research on workers in the animal and food industries for more than 10 years.

“I was surprised by how many workers reported moderately severe injuries that were not severe enough to keep them from going to work but certainly affected their quality of life,” Leibler said.

“Our employees are our most important asset, and their safety is of paramount importance,” said the National Chicken Council, a national nonprofit organization that lobbies on behalf of the chicken industry, in a press release regarding declining injury rates.

The GAO recommended OSHA consider conducting off-site interviews or find other ways to receive complaints anonymously to encourage workers to speak up about their conditions and injuries, Barnes said.

A culture of fear

Underreporting is typically a result of workers’ fear of retaliation by employers. This retaliation can mean punishment ranging up to job loss or even deportation for workers who are undocumented, Leibler said.

“What we are finding is that a lot of the workers are afraid,” said Cindy Brown Barnes, director of education, workforce and income security issues for the GAO.

“The whole fear of retaliation prevented them, in some cases, at least they told us, from really speaking up or at least being very open and honest about the conditions they were facing.

In some cases, this fear could arise from issues pertaining to immigration status, even if a worker is in the country legally, said Rafael Gely, a University of Missouri law professor who specializes in labor and employment law.

“If your immigration status is questionable, you will not complain if your employer refuses to provide you whatever benefit you’re entitled to,” Gely said. “You will be more concerned about being deported than whatever problem you are having.”

Leibler has seen similar problems with immigrants in poultry processing.

“I think for some workers and slaughterhouses, there are issues of immigration status that make it more difficult to say, ‘I am hurt for the day or the week, and I can't come to work,’ ” Leibler said. “So many continue to work while they are injured, if they can.” 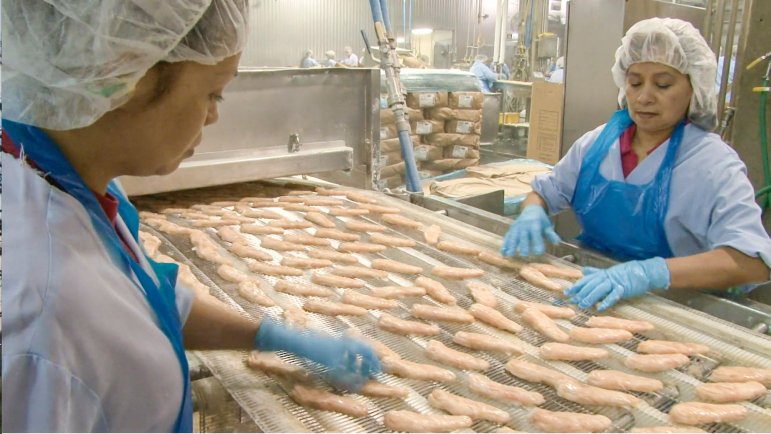 The poultry processing industry has devised a way to track employee behavior. It’s called the “point system.” Points are added for things like missing a shift because of injury or illness.

These systems are common throughout the poultry processing industry, according to a Northwest Arkansas Workers Justice center report. In Alabama, for example, 97 percent of poultry processing workers interviewed for a 2013 Southern Poverty Law Center report said there was a point system at their jobs.

Critics have said these point systems discourage workers from taking breaks and time off of work to address health needs.

“A lack of sick days and the use of attendance-driven point systems force workers to ‘choose between their health and their employment,’ ” reads the testimony of a poultry worker in the same Arkansas Report. 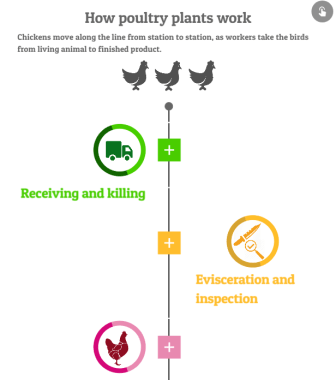 Tyson Foods Inc., one of the largest poultry processors in the country, also uses a point system “to encourage attendance as well as communications between production supervisors and hourly team members,” according to the company’s website.

Jacqueline Menjivar, 20, has been working at Tyson Foods for the past year-and-a-half. She said Tyson’s point system does not penalize workers for things like taking bathroom breaks or reporting injuries, as some critics have accused poultry processors of doing.

Instead, Menjivar said the point system is a way of penalizing workers who don’t show up. Calling in sick to work gives an employee one point, for example.

If you don’t show up and don’t call, “they give you three points,” Menjivar said. She said once workers hit 14 points, they are fired.

Elvira Satterwhite, a pastor and immigrant rights advocate for over 20 years in Sedalia, Missouri, said members of her congregation who work at Tyson have had different experiences with the company’s point system.

From the top down

On the front lines of labor relations at Tyson are 98 chaplains which the company employs as faith-based employee consultants in its plants. According to Tyson’s website, the company’s chaplaincy program exists to “provide compassionate pastoral care to team members and their families” regardless of employee faith.

“I was an in-between person, a sounding board for anyone that needed help,” said Reverend Chris Carver, a former Tyson chaplain who worked at the company’s Monett, Missouri, complex from 2002 to 2014.

“We interacted with all team members,” he said. “I got involved with anything and everything that they needed help with, mostly interpersonal.”

Serving as an employee confidante gave Carver an inside perspective on the concerns of hourly workers.

“I think they always struggled with management,” Carver said, adding that he felt employees appreciated the company’s providing chaplains as a go-between. “There’s always that tension. Did they get along well? Depends who you talk to. But generally speaking, yeah. There was good respect.”

Carver said one of the more common issues workers approached him about was difficulty getting time off.

Overall, Carver said his impression of the way Tyson treated their workers was good. He recalled one situation where a worker told him he was in danger of losing his home due to unpaid liens against the property. Carver got in touch with the family who sold the worker the house and helped resolve the situation.

“If we didn’t have chaplains, would that have happened? I don’t know,” Carver said.

At Tyson’s Sedalia plant, Menjivar also said workers get along with the management.

“They actually get involved and don’t just watch. Our supervisors, they don’t just supervise,” Menjivar said. “If we need a break, they’ll come where we’re standing and take our spot, and we can go take a break.”

“That’s a big thing there,” Menjivar said. “They make us wear green every Wednesday for safety, ‘cause that’s the safety color there.”

But injuries do happen. If a worker reports that he or she has been hurt, a supervisor will send him or her to the plant’s first aid station to get examined and treated by a nurse or doctor.

OSHA requires trained healthcare professionals to work at every workplace to provide first-aid treatment for workers that is not near a hospital or healthcare clinic. According to a 2016 GAO report, these medical units often treat surface wounds and drain blisters, among other things.

But some OSHA officials have expressed concerns over both access to and quality of the medical units within many meat and poultry processing plants.

According to a 2017 GAO report, some medical units were found to offer first aid treatments, such as providing over-the-counter painkillers or ointments when they should have been referring injured or ill workers to a doctor.

The same report found that some workers said that they were reprimanded for going to the medical unit, or even had their requests for further medical care ignored by staff.

“Some workers do go to the health units and try to get care. Sometimes the level of care is not quality care,” Barnes said. “A lot of times, they didn’t write down anything. They didn’t write down that there was a visit or there was an injury. So if those records, those logs, are not being maintained, then OSHA is not going to know what’s going on in the plants.”

This story was produced by students in a Spring 2018 investigative reporting class at the University of Missouri School of Journalism taught by Sara Shipley Hiles.

Sara Shipley Hiles is an assistant professor at the University of Missouri Journalism School and a former reporter for the St. Louis Post-Dispatch, The (Louisville) Courier-Journal, and The Times-Picayune in New Orleans.

Huiqi Xu is a graduate student studying Computer-Assisted Reporting at the University of Missouri.

Maureen Strode is a junior studying Investigative Journalism at the University of Missouri.

Andrew Withers is a junior studying German and Data Journalism at the University of Missouri.