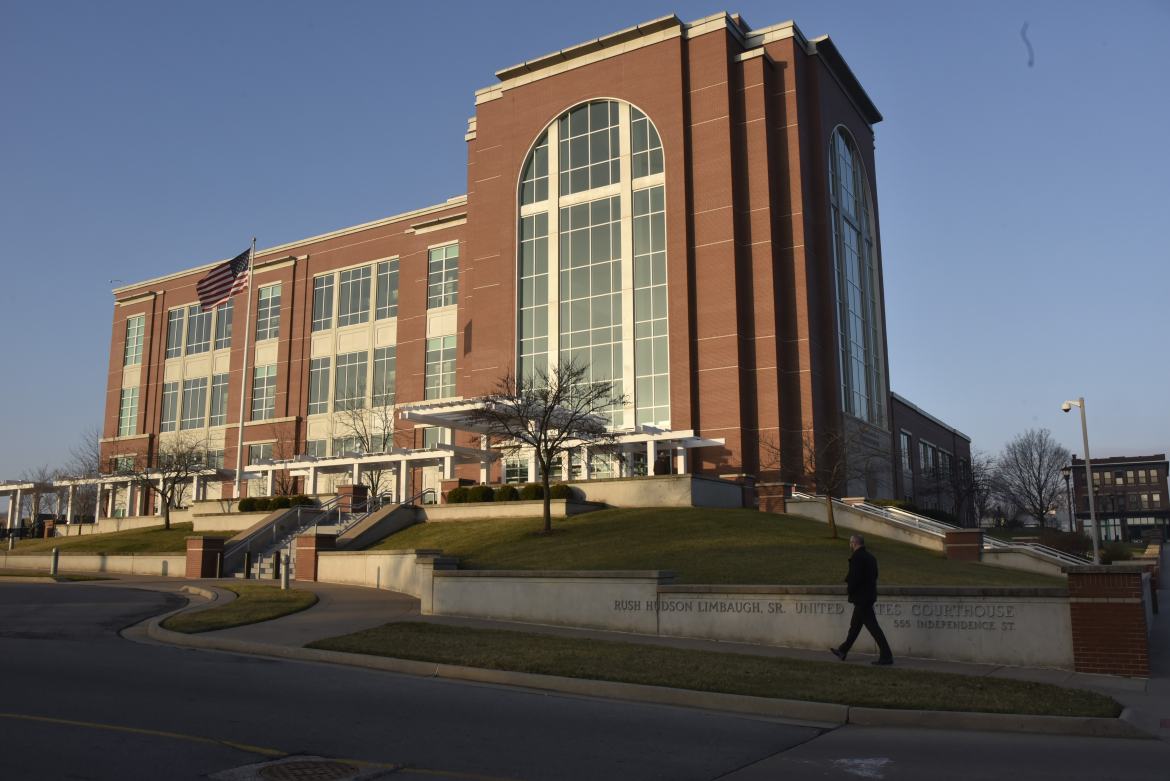 CAPE GIRARDEAU, Mo. - With closing arguments set for 9 a.m. Friday, I decided to reflect on the biggest news items coming out of the three-week trial of the lawsuit filed by Bader Farms against Bayer and BASF.

Bader Farms is suing Bayer, which acquired Monsanto in 2018, and BASF alleging that they released dicamba-related products in a coordinated effort to increase their profits and demand for those products.

The companies did so, knowing the damage the herbicide dicamba would cause, the lawsuit alleges.

Bader Farms, which is the largest peach farm in Missouri, alleges it is no longer a sustainable business because of the drift and the harm it caused to hundreds of its peach trees. Bader Farms’ harvest dropped from an average of 162,000 bushels in the early 2000s to as low as 12,000 bushels in 2018, according to court testimony. The company is suing for $20.9 million.

With an increasing number of weeds developing resistance to glyphosate, Monsanto developed genetically engineered soybean and cotton seeds that could withstand being sprayed by dicamba, a volatile weed killer traditionally used on corn and traditionally used prior to the growing season. Both Monsanto and BASF also developed new versions of dicamba, touted to be less volatile than older versions.

Monsanto released the cotton seeds in 2015 and the soybean seeds in 2016, without any versions of the accompanying herbicides. Many farmers allegedly illegally sprayed older versions of dicamba in those years, harming Bader and other farmers.

The damage increased in 2017, when the companies released their new herbicides. At least 3.6 million acres of non-resistant soybean crops were damaged, according to an estimate by Kevin Bradley, a professor at the University of Missouri. The complaints increased in both 2018 and 2019 in some states, including Illinois, the largest soybean producing state.

I’ll provide an update after closing arguments on Friday morning and any news of the verdict as soon as it is announced.

Monsanto expected thousands of farmers to file drift complaints in an Oct. 2015 document.

Monsanto projected 2,765 complaints about dicamba in 2017. In fact, the company received 3,101 complaints, according to documents presented during the testimony of Boyd Carey, regional agronomy lead at Bayer.

“We anticipated it might happen,” Carey said. Carey oversaw the claims process for Monsanto’s 2017 launch of the new herbicide.

Both companies had a policy to never settle a drift complaint.

After widespread issues in 2016, Carey asked for a budget increase to investigate those claims. The request included a projection that 20 percent of growers using the system would have inquiries about the system, including drift complaints.

A 2015 Mosanto document that discussed tools “available or under development” mentioned a dicamba inquiry form for the claims process once Xtendimax was launched. The document said the form was “developed to gather data that could defend Monsanto” and instructed field inspectors to look for symptoms other than dicamba, including environmental stress and other pesticide drift.

Carey testified that in 2017, Monsanto refused to visit any “driftee” -- an internal term for those who received crop damage -- who was not a customer. Inspectors were told to research the purchasing history to see if they were current Monsanto customers in “good standing,” or did not owe the company money.

Monsanto changed that policy after issues were so widespread.

In 2015, Monsanto decided to “pull back” on testing to allow dicamba to have a “clean slate” because federal regulators were paying attention to the new weed killer's potential to contaminate other fields, according to an email from Dr. Tina Bhakta, who, in her role as global chemistry expansion lead for Monsanto, was responsible for obtaining EPA registration for the weed killer.

The decision included limiting testings by its own employees, looking to develop recommendations for farmers, as well as by academics.

Monsanto officials lied about the testing, telling Jason Norsworthy, a professor at the University of Arkansas, they didn’t have enough dicamba for him and their own scientists to conduct tests, according to Bhakta’s testimony.

Bhakta was also a member of a team that reached out to BASF to ask the company to limit testing, she testified.

The two volatility studies that Monsanto submitted to the EPA were a 9.6-acre test over cotton in Texas on June 8, 2015, and a 3.4-acre test over bare ground in Georgia on May 5, 2015, she testified. No tests were conducted over soybeans.

BASF made millions selling dicamba in 2016

BASF’s sales of dicamba spiked in 2016, according to documents presented in video testimony from Nathan Borgmeyer, who was product launch manager for BASF’s Engenia herbicide.

Despite telling farmers it was illegal to spray dicamba over-the-top of Monsanto’s new seeds in 2016, retailers sold $100 million worth of its older versions of the weed killer, compared to about $60 million annually in 2014 and 2015. The documents stated that dicamba demand spiked with the rollout of dicamba-tolerant traits.

BASF’s sales of off-label brands of dicamba also topped off in the region in 2014, with sharp decreases in 2015 and 2016, according to a slide presented in court. The numbers on the slide were too small to read, however.

In fact, in 2014, BASF was preparing to temporarily slow down production of dicamba in its Beaumont, Texas, facility in order to upgrade the plant to be ready for the launch of Engenia. Production at the facility was cut in half between 2014 and 2016, though it was back up by 2018.

Lawyers for Bader Farms said BASF’s sales show it was “flooding the market” in preparation of dicamba-tolerant seeds and the retailers were holding onto the supply in 2014 and 2015.

During the slowdown at Beaumont, BASF imported dicamba from China, according to documents presented in court.

BASF also used “defensive planting” in its sales projections. A market analysis by Entira supplied to the company prior to the launch of dicamba-tolerant soybeans said that farmers from Ohio to Kansas City were buying dicamba-tolerant seeds because of fears of drift.

The analysis included interviews with individual farmers across that region.

In a June 2015 meeting about Engenia sales strategy, multiple Missouri-based representatives warned that, when discussing the new dicamba tolerant system about to be launched, about 50 percent of customers were concerned about off-target drift and lost profit, according to his video testimony.

While BASF was telling farmers there would be no yield impacts from dicamba drift in 2017, the company was privately telling pesticide applicators that any drift they caused could cause yield loss, according to a training document for employees investigating dicamba drift complaints.

According to the document presented in court, if dicamba drift hits soybeans during reproductive phases, yield could suffer.

Monsanto and BASF officials testified that the new versions of dicamba do not cause any “adverse” effects when used according to the label.

The company’s intention was not to tell farmers one thing and pesticide applicators, who spray the chemicals on crops, another, but to ensure that applicators knew the risk involved, Gary Schmitz, tech service regional manager for the Corn Belt, said. He said the statements made more sense within the context of the training.

“I was always told never to admit guilt,” Schmitz wrote in an email to Dan Westberg, who is also a tech service regional manager for BASF, on March 21, 2017. In the email, Schmitz was making edits to the training document, mostly around telling investigators not to give their opinion on what happened to people they’re investigating, according to the testimony.

BASF has a company policy to never settle complaints about off-target movement and that applicators are always responsible, Schmitz said.

But even if applicators follow the label, they still risk dicamba moving to other fields and causing symptomology, including cupped leaves, according to Schmitz’s testimony. Schmitz testified that the company told applicators to use their discretion, especially if a downwind farmer would be upset by symptomology.

That agreement was amended in 2014 after Monsanto invented its own herbicide.

Their agreement led to the development of three working groups: one focused on developing products, another obtaining registration for those products from the federal government and a third commercializing those products.

For example, in 2012, BASF executive management directed its sales team to encourage farmers to submit public comments to the U.S. Department of Agriculture to speak to the need for a dicamba-tolerant cropping system and the value it would provide because “we have a vested interest in their success,” according to documents presented in court.

In 2017, the companies’ executives also met to discuss a joint defense strategy. At that meeting, Monsanto agreed to stop blaming drift damage on glufosinate, the weed killer in the LibertyLink soybean system, which BASF was acquiring from Bayer, according to documents.

For every bag of dicamba-tolerant seeds sold, BASF receives payment from Monsanto. In 2016, that total was $1.3 million. In 2017, the company received $7.1 million.