Editor's note: German agribusiness companies Bayer and BASF face allegations in a civil lawsuit that they created circumstances that damaged millions of acres of crops by the weed killer dicamba in order to increase profits from a set of new dicamba-related products offered for sale beginning in 2015. A trial of the lawsuit, originally filed in November 2016 by southeastern Missouri peach farmer Bill Bader, began Jan. 27, 2020, and is expected to last two to three weeks. The lawsuit initially named Monsanto, which was acquired by Bayer in 2018. The following is a free preview of the day's outtakes, which will be made available each day of the trial to paid subscribers of the project.

CAPE GIRARDEAU, Mo. - For years, Monsanto and BASF have been blaming alleged crop damage from the weed killer dicamba on other factors, including weather, other pesticides and applicator misuse.

But on the first day of a civil trial in the United States District Court for the Eastern District of Missouri in Cape Girardeau on Monday, internal company documents presented in opening arguments showed that both companies were warned about the herbicide’s potential to damage other crops. Documents also showed the companies prepared for complaints about the weed killer prior to the new genetically modified crop systems being released. German agribusiness companies Bayer and BASF face allegations in a civil lawsuit that they created circumstances that damaged millions of acres of crops by dicamba in order to increase profits from a set of new dicamba-related products offered for sale beginning in 2015. A trial of the lawsuit, originally filed in November 2016 by southeastern Missouri peach farmer Bill Bader, began Monday and is expected to last two to three weeks.

After five years of reported crop damage by the weed killer dicamba, German agribusiness companies Bayer and BASF will head to trial next week to defend themselves against charges that they intentionally caused the problem in order to increase their profits.

The Trump Administration has paid farmers billions to offset losses from ongoing trade wars, but millions have also gone to an alternative farm lender.

Agrifund LLC, which does business as Ag Resource Management, or ARM, has received more trade mitigation money than anyone else, according to a Midwest Center for Investigative Reporting analysis of U.S. Department of Agriculture data.

With Marfrig Global Foods' purchase of National Beef Packing Company, two of the four largest U.S. beef processors will be owned by Brazilian companies, which has some cattle ranchers worried.

New legislation could make it easier for farmers to hire immigrant labor. If passed, it would be the first immigration legislation to do so since the 1980s. But some say it doesn't go far enough, while others claim it's too lenient on immigrants already working in the country.

Report warns of dangers from staff decline at Illinois EPA

The state's lack of investment in the Illinois Environmental Protection Agency is putting citizens at increased risk of public health issues, according to a report released by a group of experts on Tuesday.

A battle brews in rural Wisconsin over factory farms

A community divided. A local official accused of self-dealing. A top political appointee ousted from his job. In Wisconsin, a state where the footprint of agribusiness is growing, the question of how to regulate factory farms is a pressing topic from the town hall to the statehouse.

A 10-minute delay of key USDA reports gave some people an advantage. Here’s why.

Each month, the United States Department
of Agriculture releases a series of reports that analysts, grain traders,
investors and farmers use to make decisions or buy and sell commodities.

But on Friday, November 8, two of those USDA
reports - World Agriculture Supply and Demand Estimate (WASDE) and the Crop
Production report – were delayed by at least 10 minutes.

There were 3,481 traffic accidents in Champaign County, Illinois. Here's a look at what caused them in 11 visualizations.

Does efficient irrigation technology preserve groundwater? A new GAO report says the answer is probably no.

Note: This story is embargoed for republication until Nov. 24, 2019

Efficient irrigation may produce more crops, but it doesn’t appear to preserve groundwater, according to a federal report released this week. Decades of irrigation has already depleted aquifers that many irrigated farms rely on, according to the report from the Government Accountability Office, and efficient systems appear to not help. Minus a few exceptions, GAO researchers found “there is no change in the amount of water farmers apply to a field with more efficient technology,” according to the Nov. 12 report. 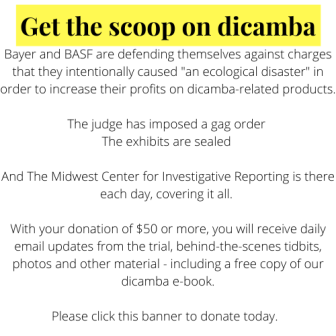 Buy our anthology of dicamba-related coverage

Thanks To Our Sponsors