U.S. Secretary of Agriculture Tom Vilsack announced on Thursday that his department will award nearly two dozen states with millions of dollars to build the gas pumps and other infrastructure needed to supply American drivers with more renewable fuel.

Vilsack made the announcement while standing outdoors in front of a plot of tall grass at the Energy Biosciences Institute’s Energy Farm in Urbana, Ill., where he was speaking with University of Illinois at Urbana-Champaign researchers about crop biomass efficiency.

For more stories on the biofuel industry, see The Midwest Center for Investigative Reporting's past coverage in "Fields of Fuel."

Overall, the U.S. Department of Agriculture will provide $100 million in federal funds, which private and state resources will also match, Vilsack said.

With the funding, 21 states will be able to install about 5,000 new pumping systems that hold higher blends of ethanol, such as E-15 and E-85. The pumps will be located at more than 1,400 gas stations around the country.

Vilsack said roughly $12 million in funding would go toward biofuel infrastructure investments in Illinois alone. That’s equivalent to about 428 new gas pumps, according to a USDA news release on the announcement. 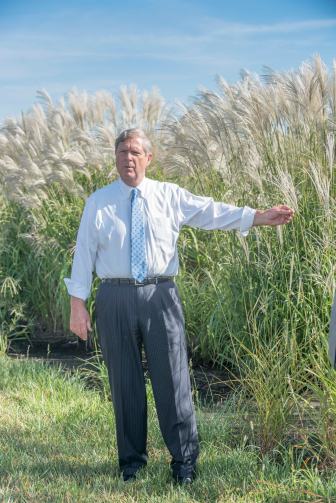 U.S. Secretary of Agriculture Tom Vilsack talks about biofuels near the University of Illinois at Urbana-Champaign on Sept. 10, 2015.

Florida will receive enough funding to build 892 new gas pumps, more than any other state.

“This is an aggressive effort on our part and we’re going to continue to be supportive of this industry,” Vilsack said. “I think we’ll continue to provide better balance and better service and better options and less expensive fuel costs for American consumers.”

Reports from oil-affiliated research groups that suggest the Renewable Fuel Standard will increase gasoline prices up to $92 per gallon of gasoline are “preposterous,” Vilsack said.

“What’s happening here is the future,” Vilsack said in reference to the Energy Farm. “This [investment] is the right way to approach diversifying and balancing out our energy portfolio.”

The USDA commitment also comes at a time when advanced biofuel endeavors are facing widespread uncertainty. Some companies have slashed their investments, including British Petroleum, which recently cut its investments in the Energy Bioscience Institute.

“Most importantly, we’re going to be standing shoulder to shoulder with the industry and make sure they have the support they need,” Vilsack said.

The secretary of agriculture was scheduled to follow his talk on biofuels with an address on food insecurity and climate change challenges in agriculture.

Before heading the U.S. Department of Agriculture, where he’s worked for more than six years, Vilsack served two terms as the governor of Iowa.

U.S. Secretary of Agriculture Tom Vilsack talks to the media on Sept. 10, 2015. He was at the Energy Farm just south of Urbana, Ill.