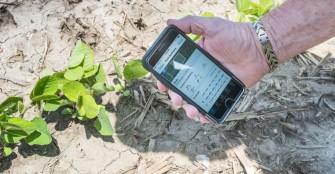 Apgar Farms representative Tom Austin demonstrates some of the data available on the Climate Corporation app used at the farm's operation near Tuscola, Ill., on June 10, 2015. Monsanto has pledged to become carbon neutral by 2021.

St. Louis-based seed company Monsanto announced last week that it had convened a new collaborative as part of its mission to become carbon neutral by 2021.

The Carbon-Neutral Collaborative is a “consortium of experts on agricultural greenhouse gases,” according to Monsanto. Its membership includes AgSolver Inc., Applied GeoSolutions, Crop Grower LLC, the National Corn Growers Association and a handful of prominent academic groups, including the University of Illinois at Chicago and Kansas State University.

Monsanto’s latest announcement comes one year after the company first outlined its ambitious plans to become completely carbon neutral, or have a net zero carbon footprint.

“Since last year, we’ve been energized and inspired by the productive discussions and efforts around climate change from the many stakeholders involved, especially our farmer customers who are the ultimate stewards of the land,” said Monsanto President and Chief Operating Officer Brett Begemann in the announcement. “While the problem of climate change is incredibly complex with many regional differences, the contributions over the past year — by some of the strongest leaders in the agricultural and environmental science — are very promising.”

The Carbon-Neutral Collaborative will advise Monsanto on how to advance its commitment on climate-smart agriculture, according to the company.

It met for the first time on Nov. 2

Released in June, the study found that widespread adoption of certain practices — cover crops, conservation tillage and precision nutrient management among them — could result in more than 100 million metric tons of carbon dioxide-equivalent emissions reductions in the United States alone.

“Climate change is one of the biggest issues we face in agriculture, as well as one of the most pressing challenges facing humanity,” Monsanto Chairman and Chief Executive Officer Hugh Grant said last year when announcing the company’s carbon-neutral pledge.