In an overlooked part of the deal, Shuanghui also acquired more than 146,000 acres of farmland across the United States, worth more than $500 million, according to U.S. Department of Agriculture data.

The deal made Shuanghui, now the WH Group Limited, into one of the biggest foreign owners of U.S. agricultural land, according to an analysis of that same data.

That purchase was just a part of a continuing surge in foreign investment in American farmland and food that has raised concerns in Congress and among rural advocacy groups.

“The more control foreign interests have in our food system, the less control we have, obviously,” said Tim Gibbons, a director for the Missouri Rural Crisis Center, an advocacy organization based in Columbia. “I think it’s a national security concern.”

Chinese landholdings increase
Since 2011, Chinese businesses have made dozens of transactions for U.S. farmland, an analysis of USDA data shows. The amount of American farmland under Chinese ownership may increase in coming months, as China National Chemical Corporation awaits regulatory approval on its acquisition of seeds and pesticides firm Syngenta. Syngenta is Swiss-owned, but it oversees substantial swaths of farmland across the United States from Hawaii to Florida. Overall, Chinese companies own or are invested in more than 240,000 acres of U.S. farmland, USDA data shows.

“When foreign entities buy farmland, my assumption is that we’re never going to get that farmland back,” added Gibbons. “They’re going to keep it forever.”

Indeed, over the past decade, foreign companies have been investing in agricultural land in the United States at a record pace, according to a Midwest Center for Investigative Reporting analysis of USDA data. The data was compiled from 1900 to 2014 under the Agricultural Foreign Investment Disclosure Act (AFIDA).

While the database has errors and often has incomplete information, it still is a strong indicator of the quantity of land being sold to foreign interests.

The database is the result of a federal law requiring foreign owners to disclose any purchase, sale or lease of American agriculture land. Updated data is set to be released later this year.

The database shows that between 2004 and 2014, the amount of agricultural land held by foreign investors doubled from 13.7 million acres to 27.3 million acres — an area roughly the size of Tennessee.

While representing only about two percent of total farmland, the value of the foreign-owned U.S. farmland soared from $17.4 billion (in today’s dollars) to $42.7 billion during that same time period, according to U.S. Department of Agriculture data.

Most of today’s foreign investment in agricultural land began to increase in 2005, according to the Midwest Center’s analysis.

Of the top foreign investors who own agricultural land, nine bought most of their land between 2004 and 2014, about $8.1 billion worth of farmland, the Midwest Center found.

In addition to analyzing decades worth of USDA data, the Midwest Center also reviewed federal and state laws meant to monitor or restrict foreign influence in American farmland. The Midwest Center found:

Congressional concerns about foreign investment in the food industry prompted Sen. Debbie Stabenow (D – Michigan)and Sen. Chuck Grassley (R – Iowa) to introduce a bill this year to give food and agriculture officials a permanent role on the federal committee in charge of reviewing foreign investment in the United States, something the agriculture industry has lacked.

The stated goal of the Food Security is National Security Act of 2017 — supported by the American Farm Bureau Federation and the National Farmers Union — is to protect U.S. food security in years to come by ensuring America’s crops, livestock and agribusinesses remain under domestic control. 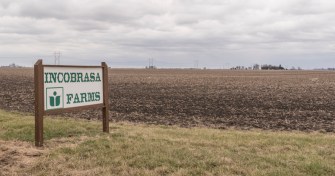 “As we think about the future and the growing global population, it’s important to consider who will control the food supply,” Grassley said in a statement. “Today, there may not be a food shortage in the world, only distribution problems that are more the result of politics and not logistics, but in the decades to come, it may be a different story.”

In the 1970s, governors from a dozen states identified foreign investment in farmland as a potential problem in a Government Accountability Office report.

In that report, the states that viewed foreign investment as a possible threat told the accountability office that foreign investment could drive up the price of farmland beyond the reach of local residents and allow foreign interests to control domestic food prices. 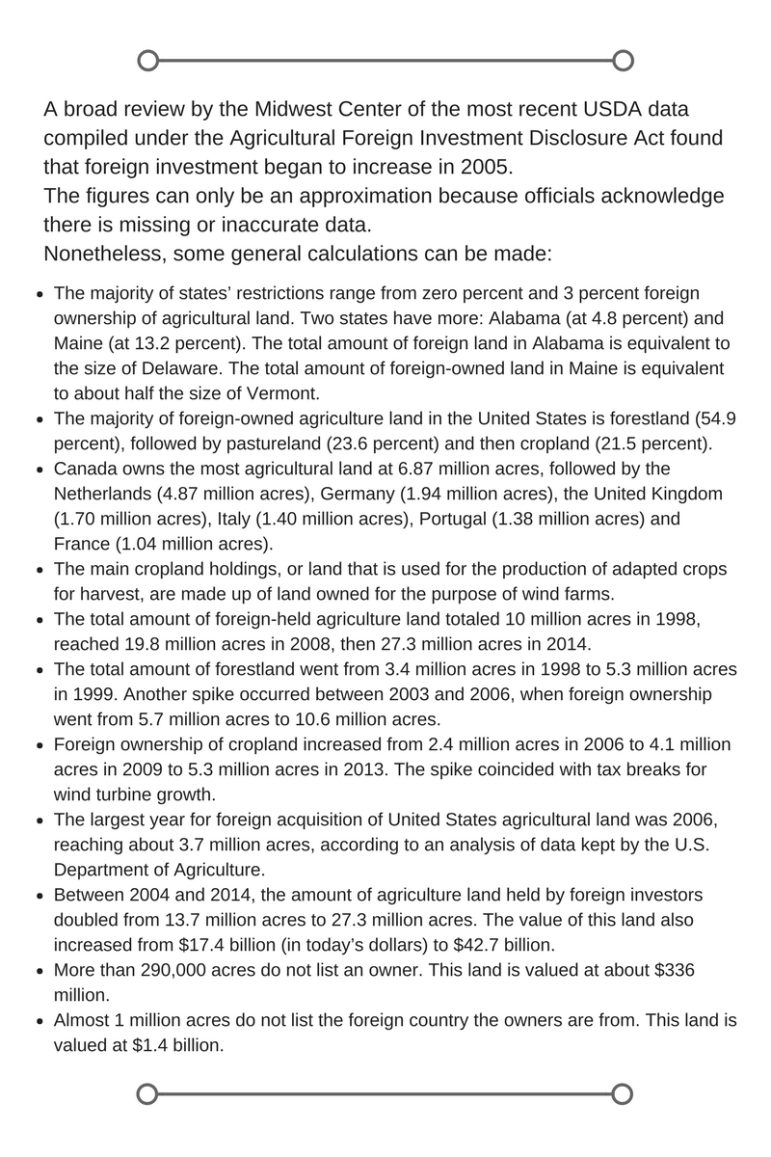 Because of those concerns, Congress passed the Agricultural Foreign Investment Disclosure Act (AFIDA) in 1978.

Under the act, foreign owners who acquire, sell or gain interest in U.S. agricultural land must file disclosure paperwork, known as the FSA-153 form, with the USDA’s Farm Service Agency.

Information included in the paperwork includes data on where property is located, how much it’s worth and basic background on how it will be used.

That information is then used to produce periodic reports for Congress and the White House, said Program Manager Lesa Johnson.

But Johnson said the USDA does not verify the data, making the database entirely dependent on self-reported information that could have errors.

In addition, foreign entities only have to file paperwork again when farmland changes hands. There is no routine follow-up required to evaluate whether anything, such as land use, has changed, Johnson said.

For example, a Midwest Center analysis of the data found that almost one million acres of foreign held agriculture land do not list which country owns the land. This land is valued at $1.4 billion.

Data show that a 199-acre dairy farm in Ohio was bought for $594 million, but the purchase price was actually $594,000. Similarly, one of Toyota’s holdings in the United States is listed as selling for $737 million instead of its actual sale price of $737,000, because of another three-zero error on one of its properties.

“Another issue is sometimes we’ll have a foreign investor file with us for the acquisition of the land, but they don’t know that they are also required to report to us when they sell the land,” she said. “That’s been an issue, too.”

In addition to the federal disclosure act, at least 22 states regulate foreign ownership of farmland, according to a Midwest Center review of state laws.

Iowa law, for example, forbids any “nonresident alien, foreign business or foreign government” from holding agricultural land in the state, though certain exceptions can be made related to inheritance.

Missouri law caps foreign ownership of agricultural land at 1 percent of the state’s total agricultural acreage. But Missouri — which in recent years has passed at least two laws easing restrictions on the amount of farmland foreign interests can buy — ranks near the middle compared to other states with foreign-owned agricultural land, the USDA data shows.

Texas and Maine, which have no laws limiting foreign ownership, each have nearly 3 million acres of crop, timber and pastureland owned by foreign entities, far more than any other state. Other states with more than 1 million acres of foreign-owned farmland include Alabama, Washington, Florida, California, Colorado, Louisiana and Georgia.

“We need to have laws in the books that stop global, foreign corporations from controlling farmland,” Gibbons said.

Louisa Burwood-Taylor is head of media for the online investment platform AgFunder, which connects agribusiness startups to accredited investors. She said it can be “very hard to make broad-brush statements” on whether foreign ownership is positive or negative.

“It completely depends on who the buyer is and what kind of industry they’re coming from and what their angle is, what their motivation is,” Burwood-Taylor said. “And that’s going to be the same for if they’re a local investor or a foreign investor.”

Burwood-Taylor said the spike in investment during the aftermath of the global financial crisis in 2007 was likely tied to an overall move away from stocks, which were perceived as riskier by investors.

“Obviously, a lot of people got burned,” she said. “There was this general kind of shift toward investing in real assets and wanting to own something real and tangible, so I think that definitely played into it.