Since their introduction in the 1990s, genetically engineered corn seeds have indirectly led to higher yields through built-in protection that comes with insect and pesticide resistance.

A surefire way to physically make an ear of corn grow larger, though, has long eluded researchers — until now.

If accurate, that would tack an extra inch or two onto a typically foot-long ear of corn. That seemingly small gain could largely influence the food industry, as corn grain is used for everything from cereal and soda to livestock feed and fuel.

“Farmers get an improved harvest and higher yields,” said Joe Walsh, North American corn technology lead for Monsanto. “It would be the first product of its type.”

While bigger corn would likely be a major triumph for the St. Louis-based seed company, economists caution that widespread planting of such a product could add pressure to a market hurting from too low prices driven downward by too much corn.

After spiking to record $8 per bushel in drought-stricken 2012, the price of corn has hovered below $4 a bushel throughout 2015.

“There’s been a sharp reduction in corn prices, along with many other crop prices, the last couple of years,” said Patrick Westhoff, a University of Missouri professor and director of the Food and Agricultural Policy Research Institute. “You can even tell stories where increase in yield at the farm level could actually end up reducing producer income because the drop in price may be larger than the increasing quantity.”

Paul Jeschke, a corn and soybean farmer in Mazon, Ill., said his 4,000-acre operation has already been affected by the corn surplus and low prices. Jeschke, who works with his wife, brother-in-law and nephew, has started storing corn in hopes of selling it later for a better price.

“The number one challenge for corn growers today is profitability,” the fifth-generation farmer said.

The Jeschke family farm, located about 75 miles southwest of Chicago, is equally split between soybean and corn this year, but has normally been a mostly corn operation. 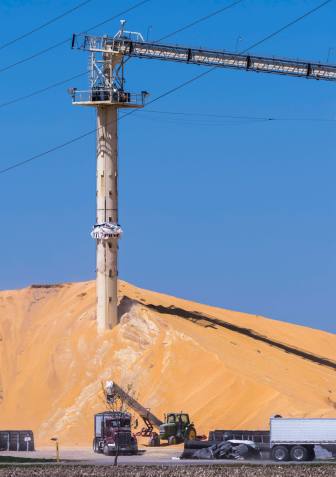 Although Walsh said Monsanto’s bigger corn is in its advanced development phase and still years away from a commercial release, publicly available records show the company has already taken early regulatory steps needed to get the GMO commercialized in the United States.

Monsanto filed a petition in September 2014 to get the corn approved by the U.S. Department of Agriculture’s Animal and Plant Health Inspection Service. The agency evaluates whether new genetically engineered crops will likely act as plant pests and threaten farmers’ existing crops.

It’s part of a three-pronged system known as the 1986 coordinated framework for biotechnology.

The U.S. Food and Drug Administration and the Environmental Protection Agency must also sign off on new biotechnology products before they hit the market.

“[The higher yielding corn] has been in the process for quite a while,” Walsh said.

In July, the Animal and Plant Health Inspection Service recommended full deregulation in a draft decision on the higher yielding corn. The agency explained that the corn is compositionally similar to common strains of corn and would not likely pose agricultural, environmental or economic dangers once approved.

Its recommendation applied to any future offspring produced from other approved corn varieties interbred with the higher yielding corn strain, as well.

A Midwest Center for Investigative Reporting analysis of USDA testing permit data shows that Monsanto has been experimenting with ways to specifically increase corn yields since at least 1999. Those tests have been held in dozens of states on tens of thousands of acres.

“[The corn] is moving through the regulatory process as expected, and there are no real surprises there,” Walsh said.

The USDA will soon submit a final decision after reviewing public comments.

“I urge this organization to refuse to grant Monsanto any additional power to attempt to control not only American food sources, but the world’s food sources,” one public comment submitted to the USDA stated. 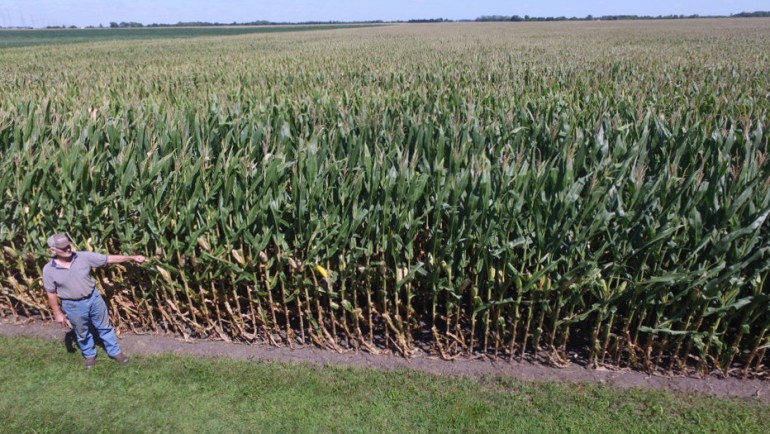 Paul Jeschke stands next to a corn field on his farm near Mazon, Ill., on Aug. 20, 2015. The U.S. Department of Agriculture projected that the 2015 corn harvest will be among the largest on record.

At an annual production value regularly exceeding $52 billion, the U.S. corn crop is worth more than any other, including the value of all fruits, vegetables and nursery crops combined.

“Corn is used for a variety of things in this country,” said Westhoff, who has also served as an economist with the U.S. Senate Committee on Agriculture, Nutrition and Forestry.

The last few years have netted record harvests and slashed the price of corn as a result. The USDA forecasts that 2015 won’t be quite as bountiful, but it is still projected to be among the top harvests on record. 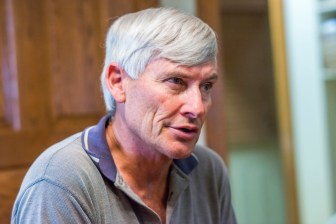 Farmer Paul Jeschke talks about the challenges of growing corn at his home near Mazon, Ill., Aug. 20, 2015. The biggest challenge, the farmer says, is profitability.

If a higher yielding corn seed made it to market and allowed growers to produce even more grain, Westhoff said consumers – not farmers – would reap the benefits.

“When there’s a change in the production and consumption of corn, a lot of people are affected by it,” he said.

More than half of the U.S. corn supply goes to feeding livestock, according to the USDA.

For farmers, turning a profit is complicated by a lot more than just low prices. As the price of corn has gone down, the cost of running a farm has shot up, too.

A significant reason, Jeschke said, has been increased seed cost. Farmers manage a stressful balancing act in hopes that yield gains from planting “the expensive stuff” outweigh price losses from an excessive supply.

Jeschke’s average production cost – which includes expenses such as pesticides, machinery and fuel – was about $530 per acre this growing season, he said. His biggest expenses are for fertilizer and seed, which he said he buys for as much as $150 an acre.

“A lot of people complain about the seed and how expensive it’s gotten to be,” he said.

Despite the price concerns, Jeschke said his fellow corn growers would be quick to try out yield-boosting seeds, and past rates on seed adoption support his notion. In the past 15 years, farmers transitioned from planting zero acres of genetically engineered seeds to 170 million acres.

“Farmers would certainly be excited about that,” said Jeschke. “No one wants to have low yields.” 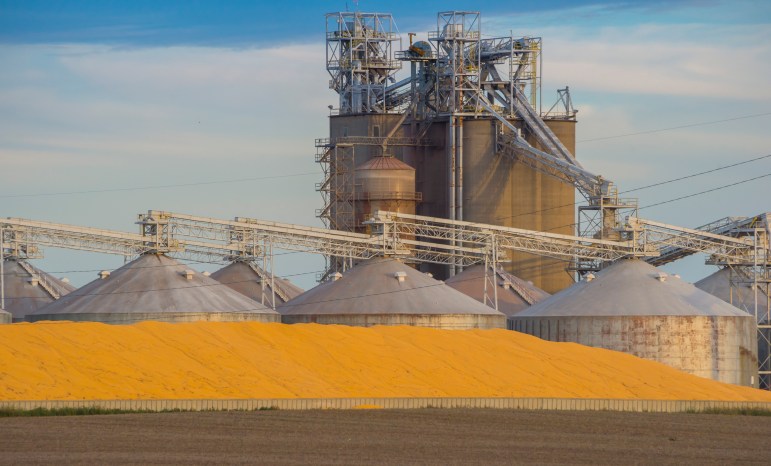 The 2013 corn harvest was, at the time, the top-yielding year on record, according to the U.S. Department of Agriculture. The 2014 harvest broke that record. As yields rose and silos overflowed, grain handlers had to store grain on the ground in large piles.

In the fall of 2013, the U.S. corn industry suffered a major blow when China, a country with strict GMO regulations, halted shipments of American corn.

U.S. farmers were growing a variety of GMO corn called Agrisure Viptera corn sold by Swiss-based chemical company Syngenta. China had not approved the Syngenta corn for import, so when the foreign power began receiving shipments with corn it had not cleared, it shut down its U.S. corn imports entirely. 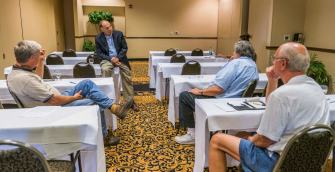 “Things work much more smoothly when other major trading partners are deciding to allow commercial use of a product the same time we do,” Westhoff said.

To avoid something similar from happening, Monsanto officials pledged to secure approval from all major corn markets before commercially releasing its higher yielding corn in the United States. The USDA agency’s initial decision explicitly stated the variety “is not expected to adversely impact domestic commerce,” nor “adversely impact international corn markets.”

Still, the National Grain and Feed Association and the North American Export Grain Association are worried. In a joint statement, executives from the associations said they took “strong exception” to what they called the USDA’s “blanket statements” on trade consequences.

Harvest activity just south of Rantoul, Ill., on September 26, 2014. According to the U.S. Department of Agriculture, 2014 was the top-yielding year in U.S. corn production history.

It would be “commercially impossible” to separate the U.S.-approved higher yielding corn from grain cleared in both the U.S. and foreign markets, they said.

The grain executives added that the USDA was “in large measure” basing its conclusions off Monsanto’s promises.

“By not referencing the importance of obtaining import approvals in key U.S. export markets as part of its domestic market assessment, [the agency’s] draft environmental assessment demonstrates an alarming lack of recognition of the significant economic impact that trade-related disruptions involving biotech-enhanced crops can have – and indeed have had,” they said.

Walsh said Monsanto “meticulously” works on all aspects of a product for several years before releasing it. Concerns aside, it’s may just be too soon to know what the future holds for the first-of-its kind corn.

“You know, I wish I had a crystal ball,” Walsh said. “Rather than speculate, we need to get through this final advanced development phase.”